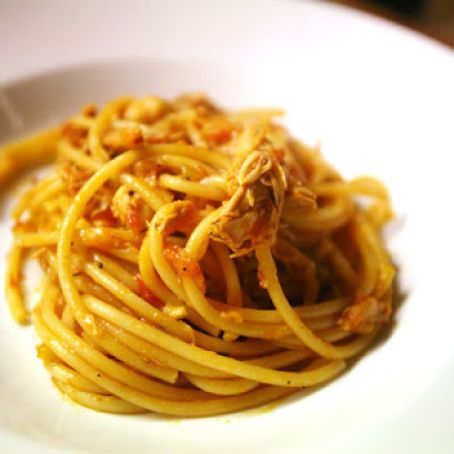 Begin by brining the chicken for about half an hour by simply letting the chicken rest in slightly salted water. After a half hour, pat it off. In a large saucepan, add in a shallot, two carrots, a rib of celery, and a bay leaf. Bring to a boil and then let cook at a low rolling boil for about 45 minutes.

Remove the chicken from the pan, and let cool. Continue to cook the remaining stock until it is reduced by about half.

While the stock is cooking down, dice up your veggies for the ragu. In a small dice, prepare a rib of celery, an onion, three cloves of garlic, and a tablespoon of fresh thyme.

In a large sauce pan, melt a tablespoon of butter into a tablepsoon of olive oil, and sauté the veggies over medium heat, until soft and golden. This could take about 15 minutes. While that's cooking down, shred up your chicken, using two forks. (Be careful that while you're doing this you keep an eye on your veggies, you don't want them to burn!)

When the veggies have softened, add in a cup of the chicken stock you've been reducing (making sure that the big softened vegetables aren't included), and a cup and a half of tomato sauce. Add in the thyme, and the shredded chicken.

Let simmer for about 45 minutes at low heat until the sauce has reduced and thickened.

In the last 20 minutes of simmering the ragu, cook your spaghetti or bucatini until one minute shy of package directions. Then, grab the cooked pasta with tongs and place in the sauce pan.

Cover with a hearty amount of freshly ground black pepper, and then toss to combine, over medium heat, until the ragu is absorbed into the pasta.