TOTAL TIME: 30 MIN
SERVINGS: 6
FAST
MAKE-AHEAD
Grace Parisi created this recipe almost by accident. When she was cooking dinner for her kids, one of them knocked into her while she was adding a few tablespoons of chicken broth to a pan of sautéed mushrooms. She poured in a lot more broth than she intended to and ended up with a terrific mushroom soup.
Plus: More Soup Recipes and Tips

Nearly any variety or combination of wild mushrooms—like shiitakes, oyster mushrooms or chanterelles—will be terrific here; cultivated cremini and portobellos are great too. If you choose portobellos, use a small spoon to scrape away the dark brown gills, since they impart an inky color and murky flavor.

Preheat the broiler. Lightly brush both sides of each slice of bread with olive oil and arrange on a baking sheet. Broil for 1 minute, until toasted. Flip the bread, sprinkle with the Parmesan and a pinch of paprika and broil for 1 minute longer, until the cheese is melted and the bread is golden and toasted.
Meanwhile, puree 1 cup of the mushroom ragout in a blender until smooth. Transfer the puree to a medium saucepan. Add the remaining mushroom ragout, the chicken stock and peas and bring to a boil over moderately high heat. Season the soup with salt and pepper and transfer to shallow bowls. Garnish with the chives and serve with the Parmesan toasts.

In a large deep skillet, heat the olive oil. Add the pancetta and cook over moderately high heat, stirring, until golden, about 5 minutes. Using a slotted spoon, transfer the pancetta to a plate; leave the fat in the skillet.
Add the mushrooms to the skillet and cook over moderately high heat, stirring occasionally, until lightly browned and softened, about 8 minutes. Add the shallot and thyme and cook, stirring, until the shallot is softened. Add the Madeira and cook until evaporated, scraping up any browned bits on the bottom of the skillet. Stir in the cream, season with salt and pepper and simmer until the ragout is slightly thickened, 2 to 3 minutes. Just before serving, stir in the pancetta. 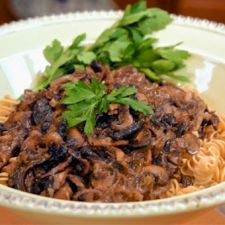