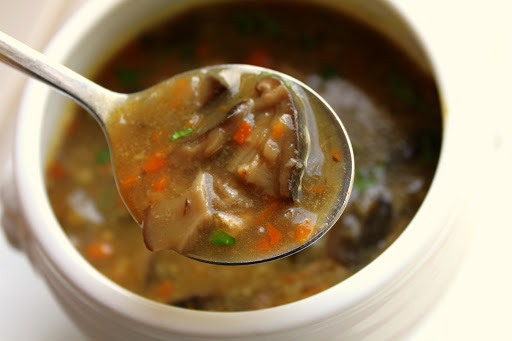 With all the holiday gastronomic feasts behind us, I wanted to get back into eating a bit healthier. This recipe comes from America's Test Kitchen's Healthy Family Cookbook. What really gives this soup a rich and earthy flavor are the dried porcini mushrooms, combined with fresh cremini and shitaki mushrooms (I didn't use Portobello's). The barley gives some great texture and more "heft" to the soup, which is very filling and satisfying. I shaved off 30 minutes of cooking time, by using my pressure cooker for the barley (only 20 minutes in the P/C). 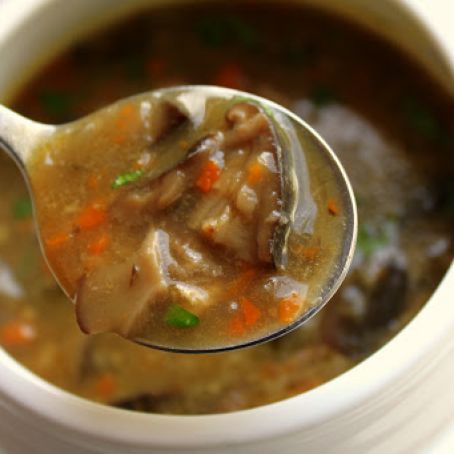 Heat the oil in a large Duch oven, over medium high heat until shimmering. Add the onion and cook until softened, about 5 minutes.

Sir in the cremini, shitaki (or Portobello) and porcini mushrooms and a pinch of salt. Cover and cook until the mushrooms are very wet, about 5 minutes.

Uncover and continue to cook until the mushrooms are dry and browned, 5 to 10 minutes.

Stir in the carrots, garlic, and thyme and cook until fragrant, about 30 seconds.

Stir in the broth, water*, and barley bring to a simmer.

Partially cover, reduce the heat to medium-low and cook until the barley is tender, about 50 minutes.
*In my pressure cooker, I added the water and pressure cooked the barley on HIGH for 20 minutes, then allowed a natural release-- while I was preparing the soup. This shaved off 30 minutes of simmering time!

Serve with salt & pepper, to taste, and serve.

Note: I liked adding a squeeze of a fresh lemon wedge into the soup, which adds a nice balance of acidity and brightness. 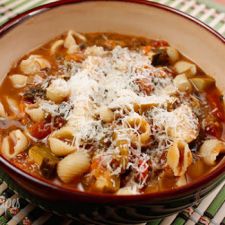