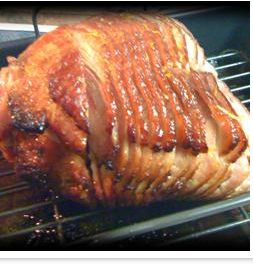 Originally posted by Jeanette to AllRecipes.com; I've added tips from Cooks Illustrated (which I've called "Option 2") amid her instructions. The best hams are labeled as including "natural juices," as opposed to additional water; shank end hams are easier to carve, and butt end hams are meatier. 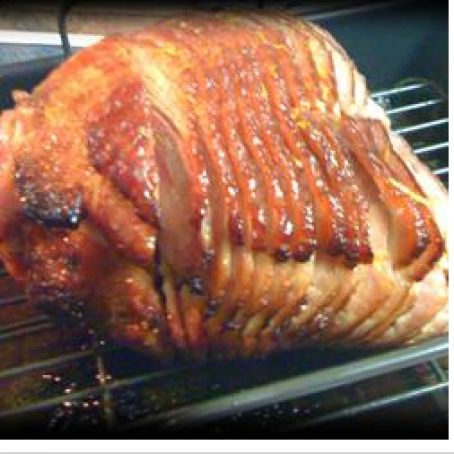 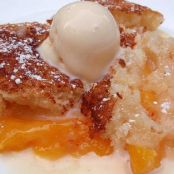 OPTION 1: Position the oven rack in the lower third of the oven, and preheat the oven to 325°F. Use a serrated knife to score the top of the ham in a diamond pattern. Press whole cloves into the ham and place on a roasting rack in a roasting pan.

Bake for 1-1/2 to 2 hours in the preheated oven, or until the internal temperature of the ham has reached 140°F. Cover with aluminum foil if the ham starts to look dry.

While the ham is baking, mix together the cinnamon, mustard and 1/2 cup of brown sugar in a cup or small bowl. Set aside.

In a saucepan over medium heat, mix together the remaining brown sugar, cider vinegar, peach nectar and peach preserves. Bring to a boil and then stir in the sliced peaches, ginger, cherry pepper and the cinnamon stick. Simmer until the peaches are tender and the sauce has thickened, 25 to 30 minutes.

OPTION 1: Remove the ham from the oven and brush liberally with the mustard glaze. Increase the oven temperature to 350°F (175°C) and return the ham to the oven, uncovered.

Bake for an additional 20 to 30 minutes, or until glaze is bubbly. Allow the ham to rest for 15 to 20 minutes before carving. Serve with hot Peach-Ginger sauce.

OPTION 2: Remove ham from oven and increase oven temperature to 350°F. Cut open oven bag and roll back sides to expose ham. Brush ham with one-third of glaze and return to oven until glaze becomes sticky, about 10 minutes (if glaze is too thick to brush, return to heat to loosen).

Remove ham from oven, transfer to cutting board, and brush entire ham with another third of glaze. Let ham rest, loosely tented with foil, for 15 minutes. While ham rests, heat remaining third of glaze with 4 to 6 tablespoons of ham juices until it forms thick but fluid sauce. Carve and serve ham, passing sauce at table. 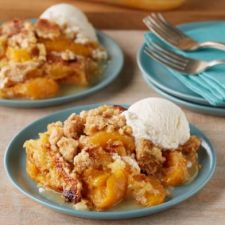