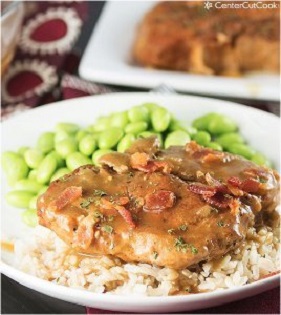 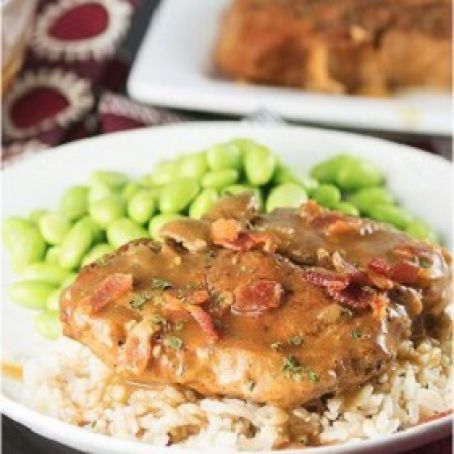 Pat the pork chops dry with paper towels, then season both sides with salt and pepper.

Cook bacon over medium high heat until crispy. Remove the bacon from the pan with a slotted spoon and transfer to a paper-towel lined plate to drain, then store it in the fridge until later.

There should be about 2 tablespoons of bacon drippings in the pan, just eyeball it. If it doesn’t look like there’s enough, add a little canola or vegetable oil and increase the heat to high. If there’s more than 2 tablespoons of bacon drippings in the pan, drain some off until you’re left with 2 tablespoons. Add the pork chops to the pan and cook for two to three minutes per side, until they are nicely browned. Transfer the browned pork chops to the slow cooker.

Add a small amount of oil to the pan if there is no remaining fat/oil, about a teaspoon. Add the onions, a pinch of salt, and 1/4 cup water and cook until the onions are translucent. Use a wooden spoon to scrape up the browned bits of pork chop on the bottom of the pan. Add in garlic and cook for another minute. Pour this mixture over the pork chops.

To the skillet combine chicken stock, Worcestershire sauce and brown sugar and bring to a boil. Pour over pork chops. Add bay leave to the slow cooker and cook on low for 7-8 hours, until the pork chops are tender.

Discard the bay leaves and carefully remove the pork chops from the slow cooker and transfer to a plate. Cover with foil to keep warm while you make the sauce.

In a small bowl combine 2 tablespoons water with 1 tablespoon corn starch. Pour this mixture into the sauce pan cook for about 5 minutes, until the sauce has thickened and is bubbly. Stir in the vinegar, add in the bacon, and season with salt and pepper to taste.

To serve: Place a pork chop atop fluffy cooked rice or egg noodles, spoon gravy over the pork chop and sprinkle with parsley. 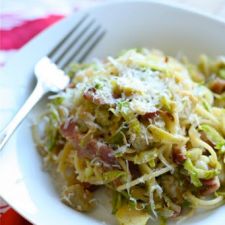