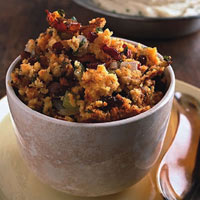 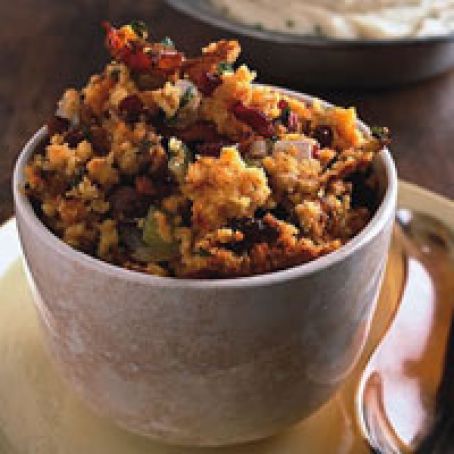 Bake the cornbread according to the package directions. Let cool and break into 1-inch chunks.
Preheat the oven to 325 degrees . In a large baking dish, arrange the cornbread chunks in a single layer. Toast in the oven, stirring once, until golden, about 10 minutes. In a bowl, whisk together the chicken broth, half-and-half and eggs. Fold in the cornbread, cover and let soak for 10 minutes, or refrigerate overnight.
In a large, heavy skillet, cook the bacon until crisp at the edges, about 8 minutes. Transfer to a large bowl, discarding all but a thin coating of drippings from the skillet. Add the butter to the skillet, then stir in the onion and celery. Cook over medium heat, stirring, until softened, 10 minutes. Stir in the chestnuts, thyme and sage during the last minute of cooking. Stir in the cranberries, parsley, soaked cornbread and salt and pepper to taste. Cover; let stand for 30 minutes.
Preheat the oven to 350 degrees . Add the stuffing to a greased 9-by-13-inch baking dish. Cover with greased foil and bake for 40 minutes. Uncover; bake until golden, 15 minutes. 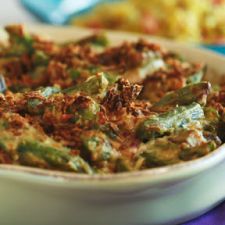