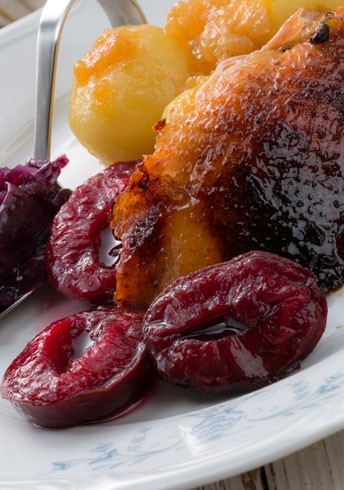 A very tasty chicken dish that is both family friendly and entertainment worthy. It can be made ahead of time and reheated as well. I have also done it in the crock pot by browning a cut up whole chicken or bone-in chicken breasts. I like the skin on sometimes as it adds a new dimension of flavor to the dish. Canned plums are sometimes hard to find in my area except in November and December, so I stock up for the summer. 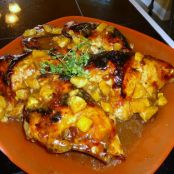 2.Drain the plums and reserve the syrup. Remove the pits from the plums.

3.In a blender or food processor, whirl the plums and syrup until pureed if a thinner consistency desired; I prefer to puree half the plums with the syrup and coarsely chop the rest of the plums and add to the puree. I like it chunky.

4.Melt margarine in a wide skillet over medium heat. Add onion and cook until soft.

6.Cook, uncovered, stirring often until slightly thickened. About 15 minutes. (I have also not cooked it at all and just dumped the mixture over the chicken and baked all together. The sauce is thinner but still tastes great!)

8.Bake, uncovered, for 30 minutes, basting with plum sauce every 15 minutes. Turn the chicken over and bake, basting occasionally, for 30 more minutes. (I have also just browned the chicken and thrown it in a crock pot and added the sauce, cooking it on low for 4-6 hours).

9.Heat the remaining sauce and pass it at the table. 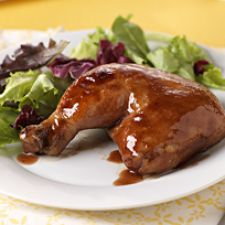