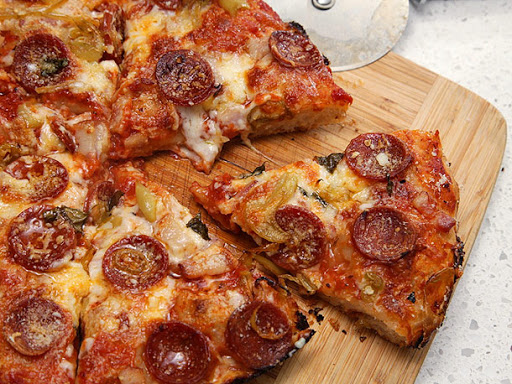 This is not deep dish. 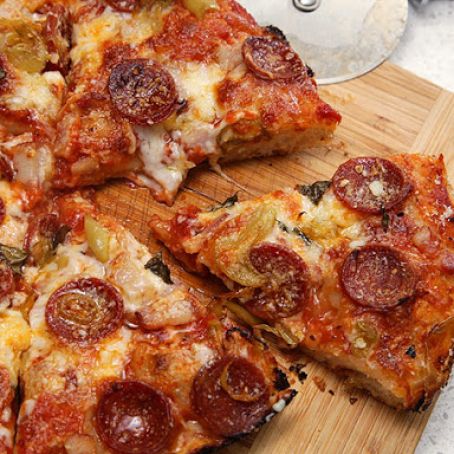 Combine flour, salt, yeast, water, and oil in a large bowl. Mix with hands or a wooden spoon until no dry flour remains. The bowl should be at least 4 to 6 times to volume of the dough to account for rising.

Cover bowl tightly with plastic wrap, making sure that edges are well-sealed, then let rest on the countertop for at least 8 hours and up to 24. Dough should rise dramatically and fill bowl.

Sprinkle the top of the dough lightly with flour, then transfer it to a well-floured work surface. Divide dough into two pieces and form each into a ball by holding it with well-floured hands and tucking the dough underneath itself, rotating it until it forms a tight ball.

Pour 1 to 2 tablespoons of oil in the bottom of two 10-inch cast iron skillet or round cake pans. (See note above). Place 1 ball of dough in each pan and turn to coat evenly with oil. Using a flat palm, press the dough around the pan, flattening it slightly and spreading oil around the entire bottom and edges of the pan. Cover tightly with plastic wrap and let the dough sit at room temperature for two hours. After the first hour, adjust an oven rack to the middle position and preheat oven to 550°F.

After two hours, dough should be mostly filling in the pan up to the edges. Use your fingertips to press it around until it fills in every corner, popping any large bubbles that appear. Lift up one edge of the dough to let any air bubbles underneath escape and repeat, moving around the dough until there are no air bubbles left underneath and the dough is evenly spread around the pan.

Top each round of dough with 3/4 cup sauce, spreading the sauce with the back of a spoon into every corner. Spread evenly with mozzarella cheese, letting the cheese go all the way to the edges. Season with salt. Add other toppings as desired. Drizzle with olive oil and scatter a few basil leaves over the top (if desired)

Process tomatoes and their juice through food mill, pulse in food processor until pureed, or puree with hand blender. Puree should not be completely smooth, but should have no chunks larger than 1/16 of an inch. Set tomatoes aside.

Combine butter and oil in medium saucepan and heat over medium-low heat until butter is melted. Add garlic, oregano, pepper flakes, and large pinch salt and cook, stirring frequently, until fragrant but not browned, about 3 minutes. Add tomatoes, basil sprigs, onion halves, and sugar. Bring to a simmer, reduce heat to lowest setting (bubbles should barely be breaking the surface), and cook, stirring occasionally, until reduced by 1/2, about 1 hour. Season to taste with salt. Allow to cool and store in covered container in the refrigerator for up to 2 weeks.