These pumpkin cupcakes are a recipe that both adults and kids will enjoy! I recommend freezing or chilling the frosting a bit to get a better consistency. 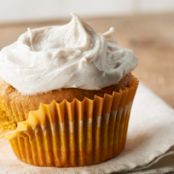 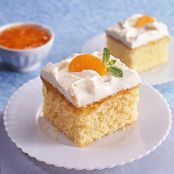 In the bowl of an electric stand mixer, whisk together granulated sugar with brown sugar until no lumps remain.

Mix in eggs one at a time, beating well after each addition. Mix in pumpkin and vanilla.

With mixer set on low speed, slowly add in flour mixture and mix until combined, then stop mixer and scrape down sides and bottom of bowl and fold batter to ensure it is well blended.

Divide batter among 12 paper lined muffins cups, filling each about 3/4 full and adding a heaping 1/4 cup batter to each well. Bake in preheated oven 20 - 24 minutes until toothpick inserted into cupcake comes out clean. Cool in muffin tin several minutes then transfer to a wire rack to cool completely before frosting.

FROSTING:
In the bowl of an electric stand mixer fitted with the paddle attachment, whip together cream cheese and butter until smooth and fluffy. Mix in vanilla and powdered sugar and whip until light and fluffy

Pipe or spread frosting over cupcakes then store in refrigerator in an airtight container. Bring nearly to room temp before serving.