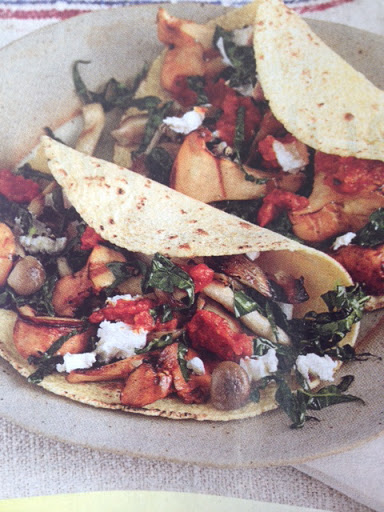 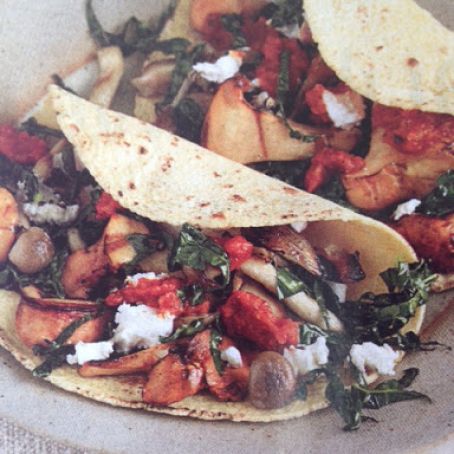 Chipotle Salsa:
1. Preheat the broiler. In a flat pan, brush onion quarters with 1 tsp. of the oil. Broil on a rack about 5 inches from the heat about 8 minutes, turning once, until soft and golden.
2. In a small skillet, heat the remaining oil over medium. Add garlic and sauté until soft and golden, shaking the pan occasionally.
3. In a blender, combine onion, garlic, tomatoes (including juices), chipotle peppers, bay leaf, cumin, basil, oregano, cinnamon, black pepper, and allspice. Puree until smooth. Pour the mixture into a large saucepan and simmer for 30 minutes. Season to taste with salt. Salsa will last for about a week stored in the refrigerator in an airtight container.

Tacos:
1. Heat a gas grill or large heavy skillet over medium-high heat. In a large bowl, toss the mushrooms with 2 tbsp. of oil, and grill or sauté them in skillet until browned and just cooked through. Remove mushrooms from heat, cut into slices, season with salt and pepper, and spoon Chipotle Salsa to taste on top.
2. In a large skillet, heat remaining oil over high. Add the kale and cook about 5 minutes or until crisp, turning often. Season to taste with salt and pepper.
3. Spoon mushrooms onto tortillas, garnish with the kale and goat cheese, and serve with some of the remaining salsa on the side. 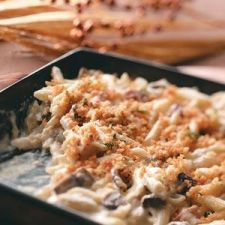