A yummy twist on the classic cornbread stuffing recipe starts with a simple cornbread recipe, followed by a stuffing made with fresh kernels of corn, onions, baby spinach leaves, and the perfect combinations of seasonings. Enjoy! 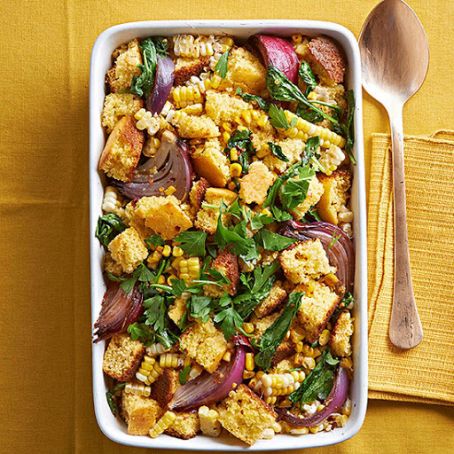 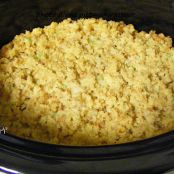 Preheat oven to 400°F. Grease a 13x9x2-inch baking pan; set aside. In a large bowl stir together cornmeal, flour, sugar, baking powder, and salt; set aside.

In a medium bowl whisk together the milk, eggs, and melted butter. Add milk mixture all at once to cornmeal mixture. Stir just until moistened. Spoon batter into prepared pan.

Bake about 20 minutes or until golden brown around the edges and a toothpick inserted near the center comes out clean. Cool in pan on a wire rack. Cut cornbread into 1-inch cubes (you should have about 10 cups).

Preheat oven to 325°F. Spread cubed cornbread in an even layer in a 15x10x1-inch baking pan. Bake, uncovered, for 10 to 15 minutes or until dry and crisp. Cool in pan on a wire rack.

In a large skillet cook corn and onion in 1/2 cup butter over medium heat for 8 minutes or until starting to brown, stirring occasionally. Stir in salt, crushed red pepper, and black pepper. In a very large bowl combine cornbread cubes, spinach, and corn mixture (bowl will be full, but will be easier to stir once the broth is added). Drizzle with enough broth to moisten, tossing lightly to combine. Spoon into a 3-quart baking dish or casserole.

Bake, uncovered, for 40 minutes or until heated through (165°F) and top is lightly browned. Top with chopped parsley.