These cheese-encrusted rounds of cooked chard, similar to frico, are from Carnia, a district of quaint cities and towns scattered along the Carnic Mountains, at the tail of the eastern Alps. From the cows grazing on its high altitude pastures comes some of the best milk used to make Montasio in all of Friuli. I like to serve these unusual and irresistible cakes as a highlight of lunch or brunch, topped with a poached egg, or in between slices of country bread, as a delectable vegetarian "cheeseburger". They're a marvelous accompaniment to grilled meats, or, cut into small wedges, a great party nibble. 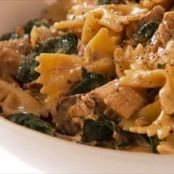 Cut off the stem at the base of the chard leaves and cut the central rib out of the leaf if thick and tough (save the stems and ribs for vegetable stock). Rinse the leaves and drain in a colander.

Bring 5 or 6 quarts of water to the boil in a large pot, drop in the chard leaves and stir to submerge them. Return to the boil and cook for 20 minutes. Drain into a colander and let cool. Chop the cooked chard into small shreds and drain once again in the colander. Press and squeeze the chard to remove as much liquid as you can.

Pour the olive oil into the skillet and set over medium heat. Stir in the sliced onions and 1/2 teaspoon salt and cook, stirring occasionally, until the onions wilt and barely color, about 5 minutes. Scatter the chopped chard into the skillet and drop in the butter pieces. Stir the chard with the onions and the melting butter; season with another 1/2 teaspoon of salt. Cook over medium heat for 7 or 8 minutes, stirring and tossing frequently, until the chard is fairly dry-don't let it get brown or crispy.

Remove the chard to a big bowl, toss with the freshly ground pepper and more salt to taste. Spread it out in the bowl to cool. Let the skillet cool, too, then wipe it clean and dry-you'll be using it again. Put the shredded Montasio in a plate or shallow bowl and toss so the shreds are loose and separate.

When the chopped chard is lukewarm or cooler, pour the beaten egg over it and mix in thoroughly with your fingers. Divide into 6 roughly equal parts and form them into patties-just like hamburgers-3 to 4 inches across. Press each cake of chard firmly so it holds together.

Set the dry skillet over medium-low heat. Hold a chard cake in one hand and cover the top with 2 to 3 tablespoons of the shredded cheese. Press the shreds so they adhere then turn and cover the bottom of the patty with a layer of Montasio. Lay the cake in the hot skillet (it should start to sizzle in a few seconds) and quickly coat 2 more patties with cheese and set them in the skillet, several inches apart. If there's room, start cooking another.

Fry on the first side for 3 minutes or longer, until the Montasio forms a crisp golden- brown crust. Shake the pan to loosen the cakes, slide a spatula underneath and flip them over. Cook and crisp the second side, another 3 minutes or so. Lift out each patty with the spatula, blot up the oil released by the cheese with a folded paper towel, and set on a warm plate (placed in a low oven if you like).

Wipe the fat from the pan, return it to the heat, coat the remaining chard cakes with Montasio and fry.

Serve the cakes warm and crispy, either whole as a main or cut into bite-size wedges.