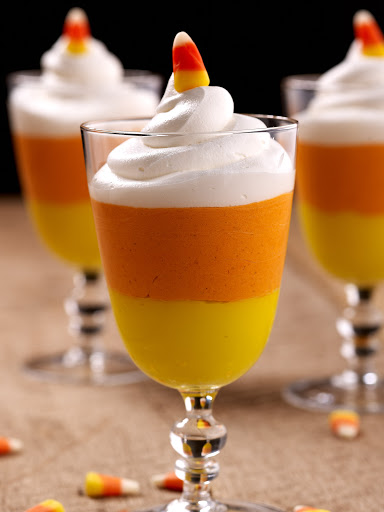 Sometimes a lighter dessert is nice after a heavy holiday meal. These colorful, candy corn-like parfaits taste like a light, fluffy pumpkin pie minus the heavy crust.

Tip: In a hurry? Use vanilla instant pudding in place of the homemade recipe below. Add the food coloring before refrigerating. 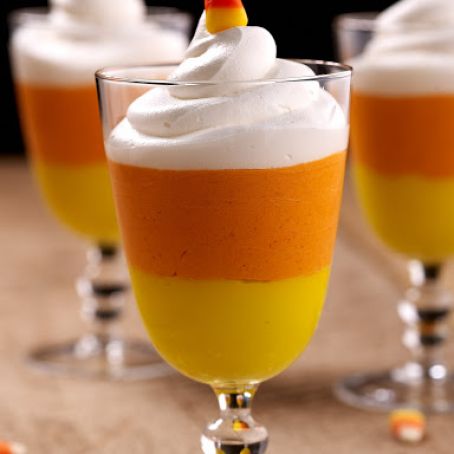 To make the vanilla pudding, heat the milk with 3 Tbsp sugar in medium-size saucepan over medium heat until the sugar dissolves and the milk is warm. Do not boil.
In a medium-size bowl, combine 1/2 cup sugar, cornstarch, egg yolks, and salt and whisk until well combined and no lumps remain. Pour the hot milk mixture, a little at a time, in with the egg mixture, whisking constantly to dissolve. Return to the pot and continue to cook, over medium-low heat, whisking constantly until the mixture thickens and bubbles.

Remove the pan from the heat, stir in the vanilla, butter, and enough yellow food coloring to make the mixture bright yellow. Pour the mixture into a medium-size bowl and press a piece of plastic wrap against the surface to prevent a film from forming. Refrigerate for at least 4 hours or until completely cold. Remove the plastic wrap from the vanilla pudding place into a piping bag. Refrigerate until needed.

To assemble the parfaits, pipe the vanilla pudding into each serving glass followed by the pumpkin mousse. Dollop the whipped topping into a piping bag and pipe it on top of the pumpkin mousse of each glass. Garnish with candy corns.