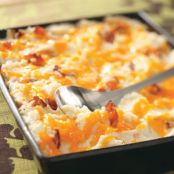 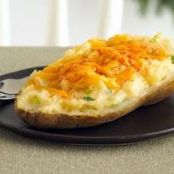 Preheat oven to 375 degrees F. Place potatoes on a baking sheet, drizzle with olive oil and season with salt. Roast for 25 to 30 minutes, or until tender through to the center when pierced with a sharp knife. Remove from oven and allow to sit for about 15 minutes or until cool enough to handle.
Slice the tops off the potatoes and use the tip of a sharp knife to outline the area you will scoop out, leaving a small rim on the inside of the skin so the potato skins will hold their shape. Use a melon baller or small spoon to scoop out and transfer the potato to a large mixing bowl. Add 1/2 cup shredded cheddar cheese, 1/2 cup sour cream, cream cheese, 1/4 cup Hormel Real Bacon Bits, seasoned salt, and pepper. Use an electric mixer to combine until creamy.
Spoon the mixture back into the potato skins, mounding slightly. Place back on baking sheet and sprinkle with remaining shredded cheddar cheese. Bake for an additional 5 to 7 minutes, until potatoes are warmed through and cheese has melted.
Garnish each potato bite with a small dollop of remaining sour cream, a sprinkling of bacon bits, and chives. 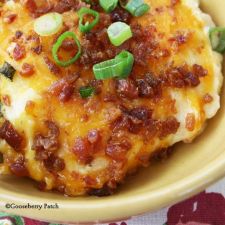