Make the crust: Pulse the flour, sugar and salt in a food processor. Add 1 stick butter and pulse until combined. Add the remaining 2 sticks butter and pulse three times, or until the mixture resembles coarse meal. Add the vinegar, then gradually add 1/3 cup ice water through the feed tube, pulsing four times, until evenly combined. Squeeze the dough between your fingers. If it doesn't hold its shape, add up to 2 tablespoons ice water and pulse two more times (the dough should still be crumbly). Turn out onto a clean surface and press into a ball; divide in half, wrap in plastic wrap and flatten into two 1-inch-thick rectangles. Refrigerate at least 1 hour or up to 2 days.

Line an 8-inch square baking dish with foil, leaving a 1-inch overhang on all sides. On a floured surface, roll out one piece of dough into a 12-inch square, about 1/8-inch thick. Transfer to the prepared dish, tucking the dough into the edges and corners; do not trim the overhang. Sprinkle the breadcrumbs over the dough and add the onion. Lay the mortadella on top, then sprinkle with about one-third of the cheese. Layer half of the potatoes and apples on top in a single layer; Season with salt and pepper to taste, then sprinkle with another one-third of the cheese. Top with the remaining potatoes, apples; season again and finish with cheese.

Roll the remaining dough into a 12-inch square and place on top of the filling. Press the overhang of the two crusts together, then roll the dough under itself and pinch to make a 3/4-inch-high edge. Make slits in the top crust with a knife to allow steam to escape. Refrigerate 30 minutes. Meanwhile, preheat the oven to 425 degrees F.

Bake the pie until golden brown, about 30 minutes. Reduce the oven temperature to 400 degrees F, brush the crust with cream and continue baking until crisp, about 35 more minutes. Cool 25 minutes, then lift out of the pan and slice. 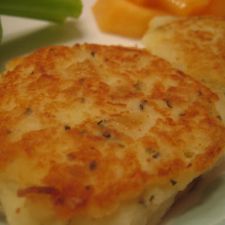