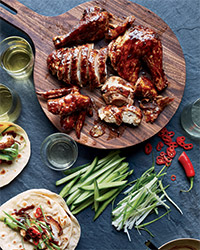 F&W’s Kay Chun rubs an Asian-spiced butter under chicken skin before roasting to create an incredibly juicy and delicious bird.

SUGGESTED PAIRING
Chardonnay is made in many different styles, but in Burgundy, it tends to have focused and firm fruit, without too much oak. This makes it great with chicken. 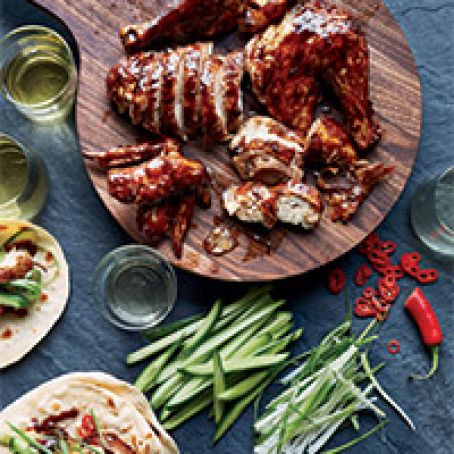 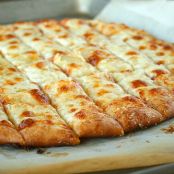 Preheat the oven to 450°. Finely grind the cloves and 3 of the star anise pods in a spice grinder and transfer to a small bowl. Mix in the butter and season with salt and pepper.
In a small saucepan, combine the soy sauce, vinegar, ginger, garlic, sugar and the remaining 2 star anise pods. Cook over moderate heat, stirring occasionally, until the glaze thickens, about 10 minutes.

Meanwhile, in a small bowl, using a wooden spoon, stir the flour and boiling water until a shaggy dough forms. Turn out the dough onto a lightly floured surface and knead until smooth, about 5 minutes. Cut into 8 even pieces and roll into balls; keep covered with a damp paper towel. Using a lightly floured rolling pin, roll each piece of dough into an 1/8-inch-thick round.

Heat a griddle and brush it with sesame oil. Cook the pancakes, turning once, until golden in spots and cooked through, about 2 minutes. Transfer the pancakes to a plate and cover to keep warm.

Carve the chicken and serve with the warm pancakes, sliced cucumbers, sliced scallions and hoisin sauce.

MAKE AHEAD The pancakes can be refrigerated overnight and rewarmed before serving. 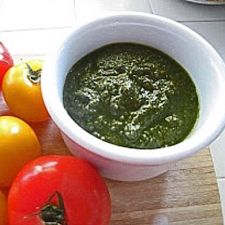