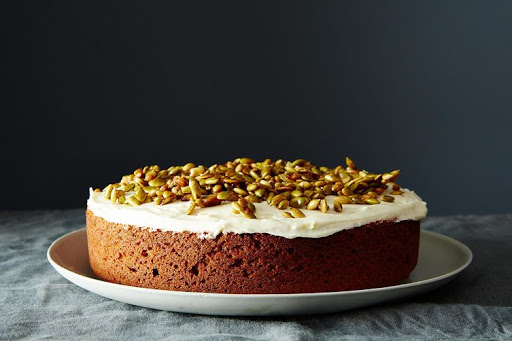 Inspired by Tartine's pumpkin tea cake, this is a perfect dessert for the fall season. Caramelized pumpkin seeds take it a notch up and add crunchy deliciousness!

The inspiration from this cake came from Tartine's pumpkin tea cake. I wanted to make a lighter, cake-ier cake, closer to a dessert you'd eat at a dinner party than to a quickbread you'd eat for breakfast. The frosting recipe is based on my idol Dorie Greenspan's Tangy Cream Cheese Frosting. 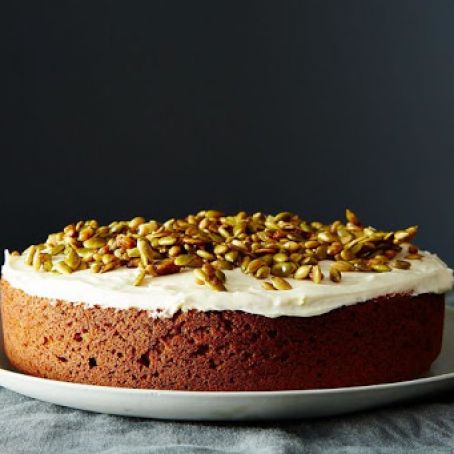 FOR THE CAKE:
Preheat the oven to 325° F and position a rack in the center. Butter a 9-inch round cake pan, then line the bottom with a circle of parchment paper and butter that, too (I like to be extra vigilant).

Use the whisk attachment of a stand mixer to combine the pumpkin, oil, sugar, and salt.

With mixer on medium speed, add the egg yolks one at a time, waiting for one yolk to be fully incorporated before adding the next. Scrape down the sides of the bowl.

With the mixer on low speed, add the flour mixture, turning off the machine as soon as the dry ingredients are just incorporated. Scrape down the sides of the bowl.

Whisk the three egg whites until they are frothy and white. Fold them into the batter using a rubber spatula until they were no longer visible (but be careful not to over mix). Pour the cake batter into the pan and bake on the center rack in the oven. Begin checking the cake after 40 minutes (mine took 42 one time, 45 the next -- the middle will set and cook a little longer from the heat of the pan as the cake cools), removing it when a toothpick or thin knife inserted into the cake comes out clean. Let the cake cool in its pan on a wire rack for at least 20 minutes, or until the cake is pulling away from the pan, before inverting it onto a wire rack.

FOR THE FROSTING:
Using the paddle attachment of a stand mixer, beat together 8 tablespoons of the butter and the cream cheese until smooth and creamy. Gradually add the powdered and beat until the frosting is smooth with no dry traces of sugar. The original recipe calls for 3 3/4 cups (1 pound) of powdered sugar, but I found that the frosting was plenty sweet (and complemented the cake nicely) after 2 1/2 cups. Add a pinch of cinnamon, and beat the frosting until incorporated.

FOR THE PUMPKIN SEEDS:
In a small saucepan over medium heat, caramelize a tablespoon of sugar until it is a rich reddish-brown color. You'll want to stir the melted parts of the sugar towards the middle while avoiding over-stirring, which can turn the mixture dry and crumbly. Once the sugar is dark and fragrant, add the last tablespoon of butter and stir quickly until it has melted and the sauce is smooth. Add the pumpkin seeds and stir until they're evenly coated in sauce. Transfer the seeds to a plate lined with parchment paper so that they cool and harden. 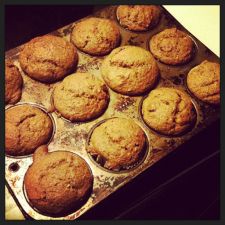