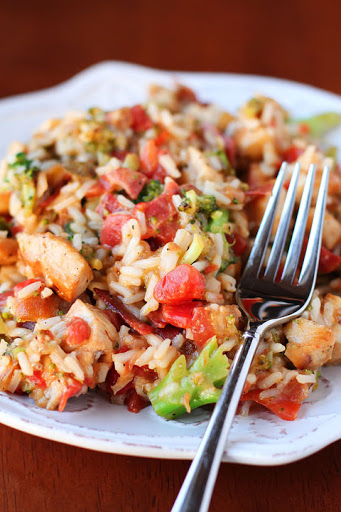 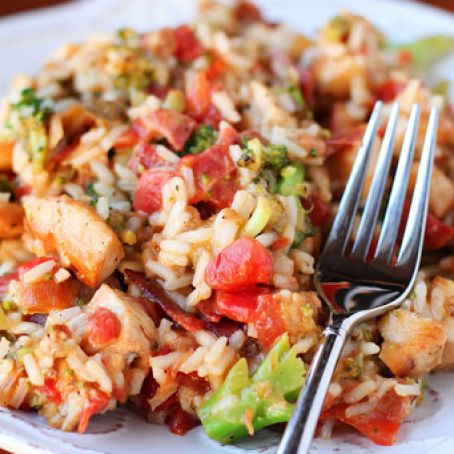 1. Add the diced bacon to a very large skillet or dutch oven and turn heat to medium high. Cook the bacon until crisp, stirring occasionally, about 10 minutes. Meanwhile, dice the chicken into bite-sized pieces. Season generously on both sides with salt and pepper. When the bacon is crisp, use a slotted spoon to remove to a plate. If needed to grease the bottom of the pan, add butter and olive oil to the skillet. Add the chicken in a single layer and cook for five minutes, flipping once halfway through. Remove the chicken to the plate with the bacon.

2. Add the rice, water, and salt to a saucepan and bring to a boil. Cover, reduce heat to low, and simmer for 14 minutes. When done, remove from heat.

3. Meanwhile, add the onion and broccoli to the skillet where you cooked the bacon and chicken. Cook over medium-high heat, stirring occasionally until broccoli is tender and onions are brown and caramelized, about 10 minutes. Add in minced garlic and cook, stirring constantly until just fragrant, about 30 seconds. Top with tomatoes, rice, chicken and bacon and stir to combine. Reduce heat to low to keep warm.

4. Melt the butter in a small saucepan and whisk in the flour until just combined. Add in the chicken broth and stir well. Increase heat to high and cook until thickened and bubbly. Remove from heat and add in cheese and salt and pepper. Stir until cheese is melted, then pour in the skillet with the chicken and rice. Stir to combine and serve. 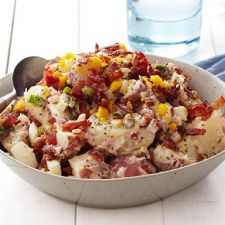