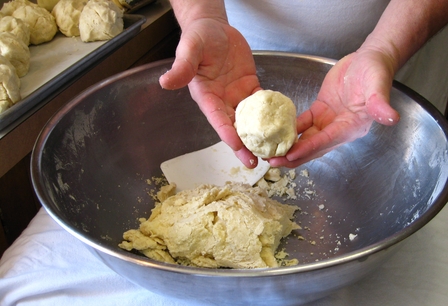 All purpose flour works best. Whole wheat makes a heartier crust, but it can also come out gummy and tough.
Any solid shortening will do, except all butter. Crisco® Zero Trans Fat Shortening is great way to cut the trans fat from your diet.
Pie pans can be disposable aluminum, glass Pyrex, or Grandma's favorite embossed tin. Do not spray or grease the pie pan.
Rolling pins can be a Grandma's wood rolling pin, or the newest stainless steel. It doesn't matter as long as you keep it coated with flour as you work the pie crust.
The pastry blender is a handy gadget usually made of stainless steel. It has a handle attached to 5 or 6 sharp thin blades that cut through the shortening and dough. Much like using two knives, it is quicker and less messy with the same results. 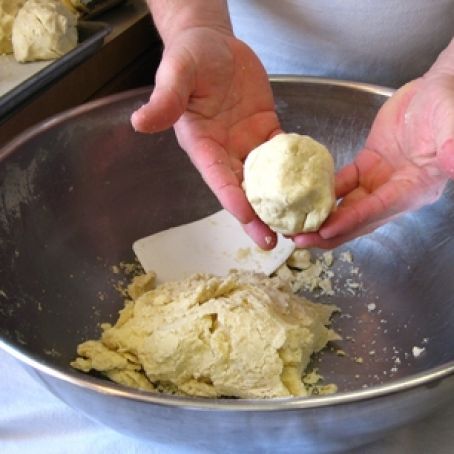 Pour half the water in, gathering it into a ball. Continue adding the water until it comes together in a soft ball of dough. You may need more or less water depending on the humidity. Do NOT knead the dough as in bread making.
Work the dough as little as you have to, just enough to keep it formed in a ball.
Divide the dough into 3 or 4 equal portions.
Cover the dough and refrigerate it for later, or use now.

Take a handful of flour and throw/sprinkle it down on a counter top. Put the ball of dough in the middle of the flour.
Coat your rolling pin with flour. Start rolling the dough with the pin, turning the dough to get a round shape. This may take several passes over the dough, turning this way and that. Flip the dough over carefully, adding flour to your surface as needed. Finish rolling on this side to make a circle that is 4" bigger than your pan.
Fold the dough in half, place it in the pan unfolding to fit. Trim if necessary, but not too much. You want to have enough to fold the edges under.
Fold the edges under, turning the pan and pressing the edge as you go.
You now have a choice as to how you want to finish the crust. If you are making an open pie as in pumpkin or pecan, press the edges down with a fork to seal the edge and give it a nice pattern.
Or, you can crimp the edges using your thumb and forefinger of your left hand and the forefinger of your right hand, and go around the edge of the pie making a v-shaped pattern, all the while keeping the edge slightly higher than the pie pan.
Makes 3-4, 8 or 9 inch crusts