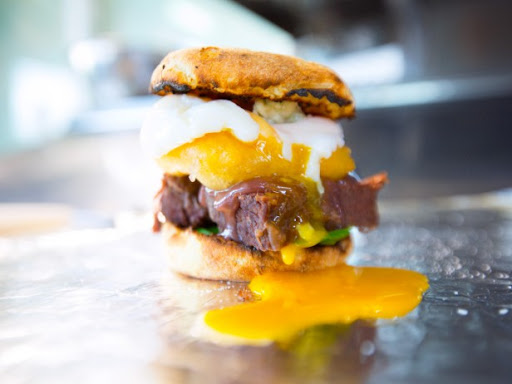 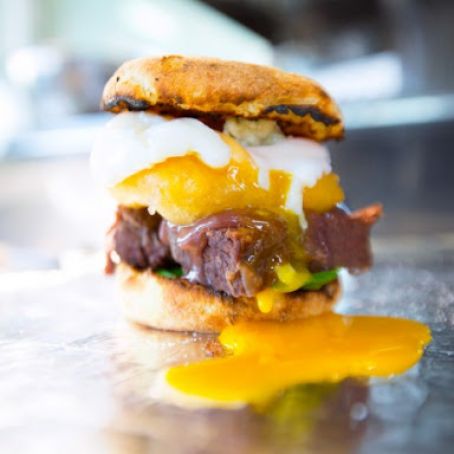 Preheat the oven to 275 degrees F.

For the bouquet garni: Put the juniper berries, peppercorns, parsley, rosemary, star anise and thyme in some cheesecloth and tie with kitchen string.

For the braised beef: Pour 1/4 inch of grapeseed oil into a large cast-iron (or heavy) pan and set over medium-high heat. Sprinkle all sides of the beef heavily with salt and pepper. Dredge in the flour. Add the beef to the hot pan and brown on all sides. Remove and set aside.

In the same pan, cook the carrots, celery, leeks and onions until caramelized and then deglaze with the beef stock. Bring the mixture to a simmer and submerge the meat. Drop in the bouquet garni and cover the whole pan in foil. Transfer to the oven and cook until you can squeeze the meat with a pair of tongs and it begins to break apart, 2 to 3 hours. Let cool to room temperature.

For the onion rings: Heat some oil (enough to submerge the onions) in a deep fryer or heavy frying pan until a deep-fry thermometer inserted in the oil registers 350 degrees F.

Slice the onions into 1/2-inch rings, ideally making enough for 2 to 3 per sandwich. Combine the cornstarch, flour, beer and cayenne pepper to make the batter. Dip the onion rings in the batter and put them in the hot oil until crispy and golden brown, 3 to 4 minutes. Remove onto paper towels and season with salt.

Cut the meat into 1/2-inch-thick slices. Heat up some of the red wine sauce in a pan. Add in the meat portions and slowly heat up the liquid and beef until hot.

For the soft-poached eggs: Meanwhile, bring at least 3 inches of water in a saucepan to a low simmer and add the white vinegar. Crack each egg shell and release the egg close to the water so it makes no splash. Add the other eggs, giving them a little bit of space in between each. With a scraper or plastic flipper, press it against the bottom of the pan and run it under each egg to be sure that the egg doesn't stick before it sets. Cook until the whites are just set.

Toast the buns and butter each side. Put a small amount of mustard on each bun. Put some arugula on the bottom buns, short ribs on top of the arugula, the Stilton on top of that, then a poached egg and finally the onion rings. Season with salt and pepper and finish with the bun tops.