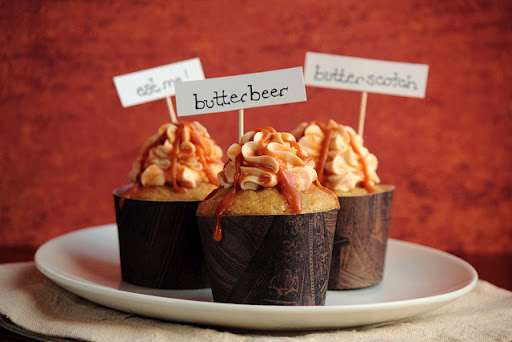 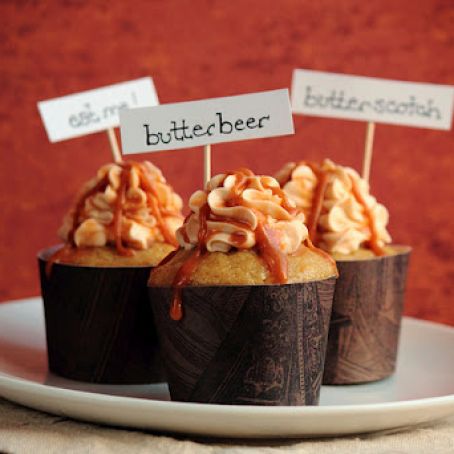 In a medium bowl, whisk together the flour, baking powder, baking soda, and salt. Set aside.

In a large mixing bowl, beat together the butter and brown sugar until light and fluffy. Add the eggs one at a time, beating well after each addition. Beat in the vanilla extract and butter flavoring.

Fold in 1/3 of the flour mixture, then the buttermilk, 1/3 of the flour mixture, cream soda, and then the remaining flour. Folding in these ingredients will prevent over-mixing and will result in a fluffier, less dense cupcake. Fill cupcake liners 3/4 of the way full and bake for 15-18 minutes, or until the cupcakes are golden and spring back when touched. Cool completely before frosting.

Ganache:
In a small saucepan on medium heat, melt the butterscotch chips into the heavy cream, stirring until smooth. Remove from heat and cool to room temperature before using.

Buttercream:
In a large mixing bowl, beat the butter until light and fluffy. Mix in the butterscotch ganache, vanilla, butter flavoring, and salt. Beat in the powdered sugar for 2-3 minutes, starting with 3 cups and adding more only if necessary. Add the cream a tablespoon at a time until desired consistency is achieved (I only needed 1 tablespoon).

Store in an airtight container at room temperature (that is, if they don't get devoured immediately).