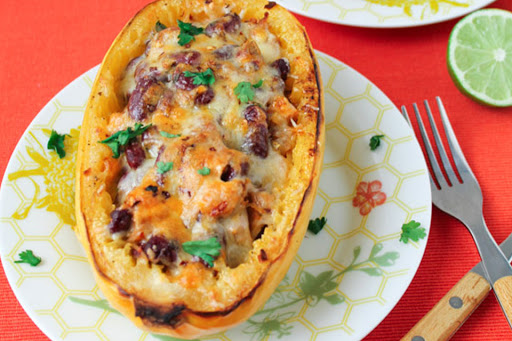 Instead of scraping the delights out of the shell and tossing it away, we’re giving the entire squash the credit it deserves. This Tex-Mex Baked Spaghetti Squash from The Honour System is stuffed with protein-packed beans and chili-lime chicken. Toss in some spice via salsa, fresh cilantro, and top it all off with a unique cheese blend and you’ve got a delicious dinner.

Preheat your oven to 425°F and line your baking sheet with parchment.

Cut the squash in half, rub with inside with olive oil and sprinkle sea salt & pepper. Place face down on the baking sheet & bake for about 25-30 minutes. The edges on the inside should be a bit browned and shreds should form easily with a fork.

Meanwhile, toss the chili flakes with the cheeses and stir the fresh coriander into the salsa.

When the squash is ready, take it out and let it stand for 5 minutes. Turn the oven to the broiler setting. Fully shred the squash, leaving the shell intact. You will be stuffing it!

Transfer the spaghetti squash to a mixing bowl. Stir in the salsa, followed by the beans and chicken. Split the mixture in half and stuff each squash shell. Top with the shredded cheese.

Place them back on the same baking sheet & broil until bubbly and browned. About 3-4 minutes. 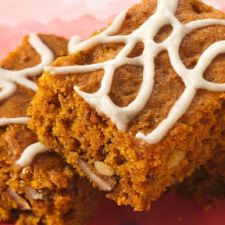