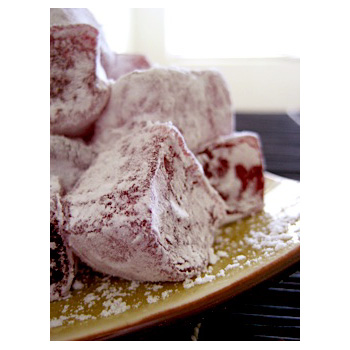 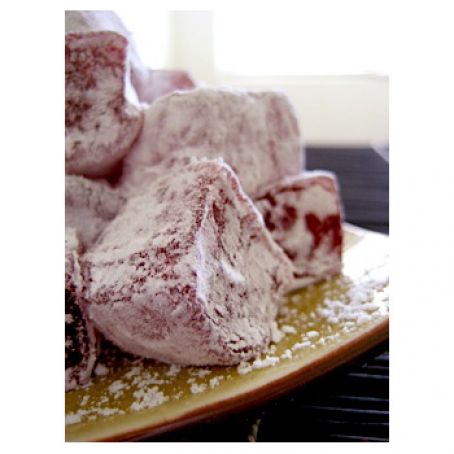 1. Boil the sugar with the lemon juice and 3/4 cups of water. Use a jam thermometer and remove from the heat when the syrup reaches the soft ball stage (115C).

2. While you are boiling the sugar syrup, combine the cream of tartar and a cup of cornflour with 1.5 cups of cold water. (Using cold water should prevent lumps.) Mix well and bring up to a simmer, stirring all the time. Continue stirring at a simmer until the mixture has made a thick, gluey paste. Stir the sugar syrup into this paste. (If you end up with lumps at this stage, push everything into a saucepan through a sieve with the back of a ladle.)

3. Simmer the sugar and cornflour mixture, stirring every few minutes, until it’s a golden-honey color and about 120C (this is halfway between soft and hard ball on your jam thermometer, and will take about an hour).

4. Divide the mixture into two, and pour it into prepared trays lined with oiled cling film. I used a small Tupperware as I wanted Turkish delights with a bit of height to them and found that with my trays they were really flat.

5. Add rose water and a few drops of pink food coloring and stir. Cover and chill for a few hours until set.

6. Turn it out and slice the set Turkish Delight into cubes, and roll in a mixture of 1/2 cup icing sugar and 1/8 cup cornflour so that they don’t stick together. Store in airtight boxes between layers of greaseproof paper, well-dusted with the icing sugar/cornflour mixture.