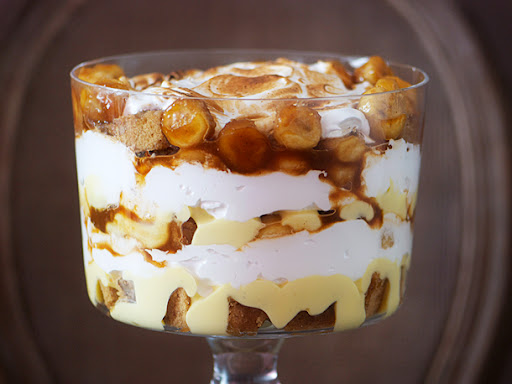 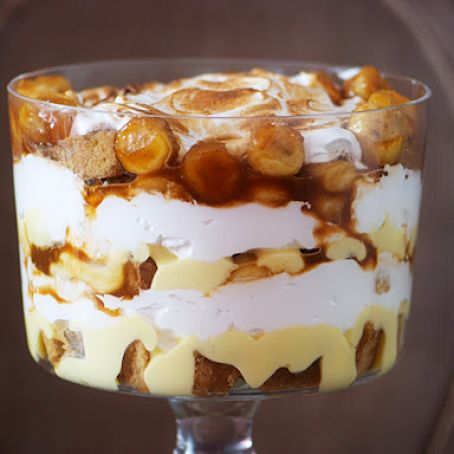 For the Brown Sugar-Walnut Poundcake: Adjust oven rack to middle position and preheat oven to 325°F. Spray tube pan with baking spray. Beat butter, oil, brown sugar, and sugar on medium speed until light and fluffy, about 3 minutes. Add eggs, one at a time, beating well after each addition.

Spoon the batter evenly into prepared pan. Bake until cake tester inserted in center of cake comes out clean, about 90 minutes. Transfer cake to cooling rack and cool in pan 15 minutes, then, turn out directly onto rack and cool completely, about 1 hour. With a serrated knife, trim off brown crusts of cake (See Notes) and cut cake into approximately 1-inch cubes. While cake is cooling, make the custard.

Bring mixture to boil over medium heat, whisking constantly until mixture thickens to the consistency of pudding. Once mixture reaches the boil, continue to boil for 1 to 2 minutes. Remove from heat and stir in vanilla.

For the Rum Simple Syrup: Stir rum, sugar, and cinnamon stick together in medium heavy-bottomed saucepan over medium-high heat until sugar is completely dissolved. Boil until syrup is reduced to 3/4 cup, 5 to 7 minutes. Remove and discard cinnamon stick. Keep warm.

For the Meringue: Stir sugar, water, and corn syrup in heavy-bottomed medium saucepan over medium-low heat until sugar dissolves. Increase heat to medium-high and boil syrup until it registers 238°F on candy thermometer, about 5 minutes.

When syrup reaches temperature, with mixer running on medium-high speed, slowly and carefully pour into egg whites. Beat until outside of bowl is cool to the touch and whites are thick and glossy, about 7 minutes.

For the Bananas Foster: In large skillet over medium-high heat, melt butter with sugar, cinnamon, nutmeg, and salt. In medium bowl, toss bananas with lemon juice. Add bananas to skillet and cook, swirling and gently tossing to coat, about 2 minutes.

Remove skillet from heat. Add rum, and ignite with match. Allow flames to die out, then cool bananas about 7 minutes.

Refrigerate trifle at least 2 hours to chill prior to serving.