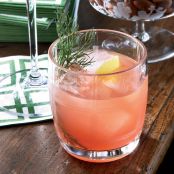 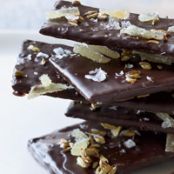 In large saute pan cook bacon until slightly crisp. Using a slotted spoon transfer to a bowl. Add 1 T. olive oil to saute pan and then the fennel. Season with salt and pepper, saute over med heat until lightly browned, 6-8 minutes. Add the broth, cream, tomatoes, garlic and fennel and cook, partially covered over low heat. Stir occasionally until the fennel is tender and the cream is slightly thickened, about 20 minutes

Meanwhile, warm the remaining 2 T olive oil in another skiller until moderately high heat, Season fillets with salt and pepper and saute for 4 minutes. Turn over and saute until just cooked through, about another 3 minutes.

Stir the mustard and bacon into the fennel ragout and season with salt and pepper.

Divide the fennel ragout among 4 plates. Place the cod on top and garnish with chopped parsley.