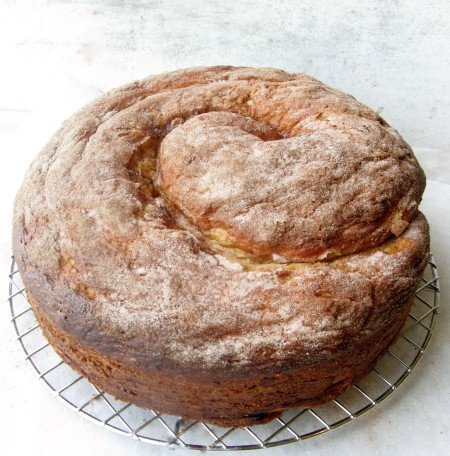 This yummy Challah is studded with fresh apple and raisins, and rolled in an aromatic coating of cinnamon-sugar — autumn flavors to complement the September Rosh Hashanah holiday. 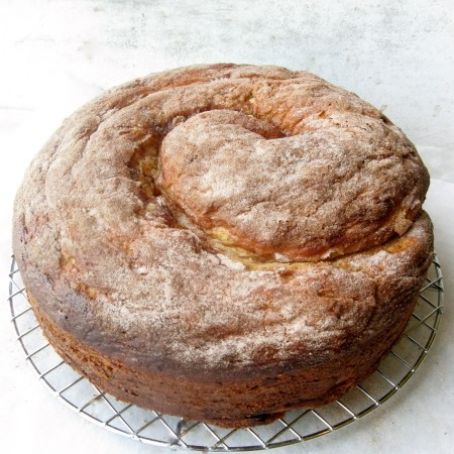 Combine all of the dough ingredients and mix and knead them, by hand, mixer, or bread machine, until you have a soft, smooth dough.

Allow the dough to rise, covered, for about 1 to 2 hours (or more, if you don’t use SAF Gold yeast), or until it’s puffy, though not necessarily doubled in bulk. An 8-cup measure is a handy tool for tracking the dough’s rise.

Gently deflate the dough, and transfer it to a lightly greased work surface.

Pat and roll the dough into a 36″ rope, tapering one end. Poke any raisins or apple bits sticking out of the dough back underneath the dough’s surface; this will help prevent them from burning in the oven.

Sprinkle the dough with cinnamon-sugar, rolling it around to coat as completely as possible.

Starting with the tapered end, coil the rope loosely into a lightly greased 9″ round cake pan, starting at the center and working outwards. Scrape any extra cinnamon-sugar off the counter, and sprinkle it atop the coiled dough.

Cover the loaf with lightly greased plastic wrap (or place it in a proof box), and let it rise until it’s very puffy, 60 to 90 minutes.

Towards the end of the rising time, preheat the oven to 375°F.

Whisk together 1 large egg white and 1 tablespoon water, and brush this glaze over the risen loaf.

Place the cake pan atop a baking sheet; this will insulate the bread’s bottom crust, and keep it from browning too much.

Put the challah in the lower third of the oven, and bake it for 20 minutes.

Tent the challah loosely with aluminum foil, and bake for an additional 18 to 22 minutes, until the loaf is golden brown.

Remove the bread from the oven, carefully turn it out of the pan, and place it on a rack to cool. 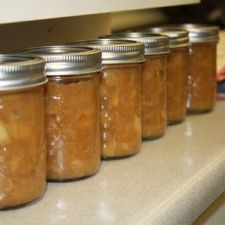