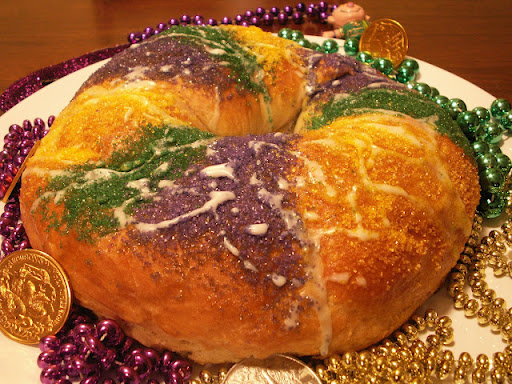 It’s Twelfth Night tonight, January 6th, the traditional start of the Carnival season, and that means King Cake parties in Louisiana. Whoever gets the baby trinket in their piece of King Cake either hosts the next King Cake party, or chokes to death because their host didn’t warn them that it was within the cake, so please do so. 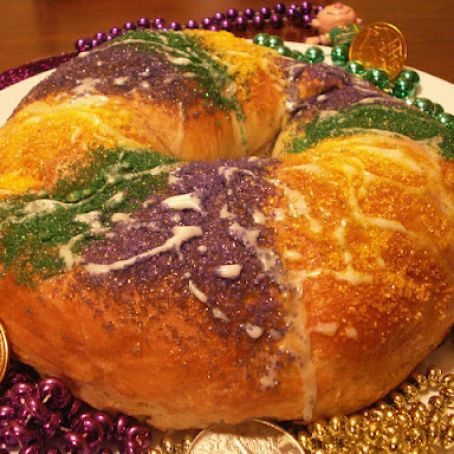 Dissolve the yeast in the workbowl of a stand mixer fitted with the dough hook attachment, let stand until frothy.
Dissolve the salt, sugar, orange zest and milk in a small bowl. When dissolved combine the milk mixture with the yeast mixture. Mix the cinnamon with the flour.
With the mixer on low speed, add the eggs, then gradually add the flour, until all is incorporated. Knead on low speed for 10 minutes, or until a smooth elastic dough is formed. A little more flour may be necessary. With the motor running, incorporate the butter into the dough, a little at a time but rather quickly so that it doesn’t heat up and melt.
Turn the dough into an oiled bowl, loosely cover with plastic wrap and let rise for 1 hour in a warm spot.
When the dough has doubled in bulk punch it down, cover and place in the refrigerator overnight.

Preheat the oven to 350 degrees F.
Roll the dough out to a 6 x 18 inch rectangle. Spead the Pecan filling (recipe below) out in the middle of the rectangle along the whole length, leaving about 1 1/2 inch on each side. Place the baby trinket somewhere with the filling. Fold the length of the dough over the filling and roll up tightly, leaving the seam side down. Turn the roll into a circle, seam side down and put one end inside of the other to hide the seam, and seal the circle. Place the cake on a baking sheet and let rise, loosely covered with plastic wrap, for 45 minutes or until doubled in bulk.

Brush all over with the egg wash, then place the king cake into the oven and bake for 30 minutes or until golden brown.

When the cake cools, brush with some of the glaze (recipe below) thinned out with more cold water. This will help the sugars adhere. Decorate the cake with the colored sugars and drizzle some of the thicker glaze onto the cake.

Place on a large round serving plate and decorate with Mardi Gras beads, doubloons and whatever else that you like.