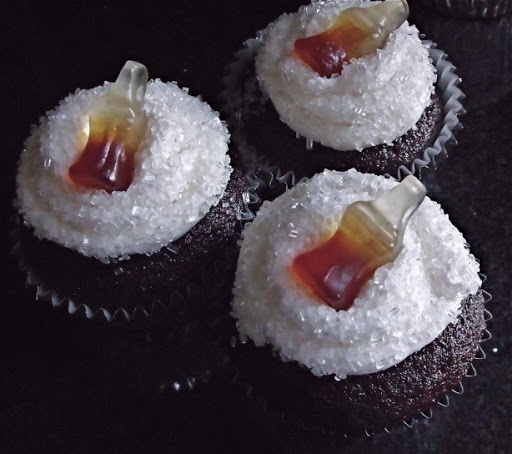 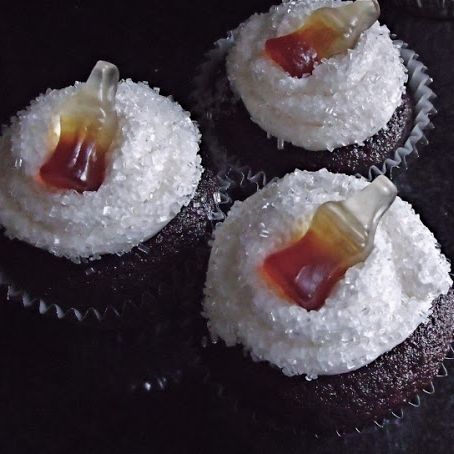 Divide batter among cupcake liners, filling them 2/3 to 3/4 of the way. Be really careful about not overfilling them – this cake rises and will spill over. I put the batter in a plastic bag and pipe it into the papers. Bake cake until tester inserted into center comes out clean, rotating them once front to back if your oven bakes unevenly, about 17 minutes. Cool cupcakes on a rack completely.

Chop the chocolate and transfer it to a heatproof bowl. Heat the cream until simmering and pour it over the chocolate. Let it sit for one minute and then stir until smooth. Add the butter and whiskey and stir until combined.

Let the ganache cool until thick but still soft enough to be piped.

Meanwhile, using a 1-inch round cookie cutter, an apple corer, or a paring knife, cut the centers out of the cooled cupcakes.

Put the ganache into a piping bag with a wide tip and fill the holes in each cupcake to the top.

Whisk the butter in the bowl of an electric mixer, or with a hand mixer, for several minutes. You want to get it very light and fluffy. Slowly add the powdered sugar, a few tablespoons at a time. It does make a difference. The frosting will be less grainy, and require less sugar to thicken them up.

When the frosting looks thick enough to spread, drizzle in the whiskey and whip it until combined. If this has made the frosting too thin, beat in another spoonful or two of powdered sugar. Don’t worry about trying to use all 6 cups, just use your intuition and stop when it seems thick enough.

Ice and decorate the cupcakes. I used a plastic zip top bag to pipe the frosting, and topped them with Wilton’s white sparkling sugar and Haribo gummy colas. I also think little gummy lime wedges would be adorable.