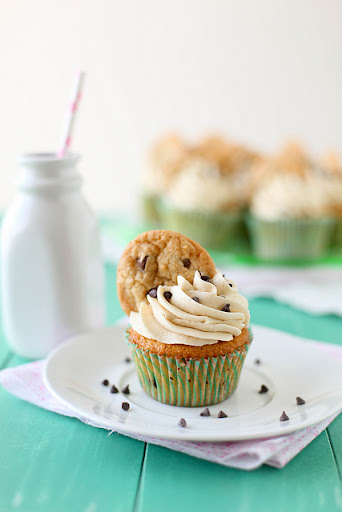 Here’s the run down on these bad boys, in case you are one of the 2% who haven’t tried them yet (say what?) They start with a moist brown sugar cupcake with chocolate chips mixed into the batter. After baking, you use the cone method to fill the cupcakes with eggless cookie dough so they are totally safe to eat. They are finished off with a generous swirl of cookie dough frosting – yes, frosting that really tastes like cookie dough! And personally I think they are not complete without a garnish of a mini chocolate chip cookie and some mini chocolate chips. These are by far the most popular cupcake choice among coworkers and friends, and for good reason. Try them yourself and see what all the fuss is about.

Note: As with most multi-component desserts, I prefer to make these over a day or two rather than all at once. I usually bake the cupcakes and mini cookies on one day, then fill, frost and assemble the next. Much easier and less stressful. 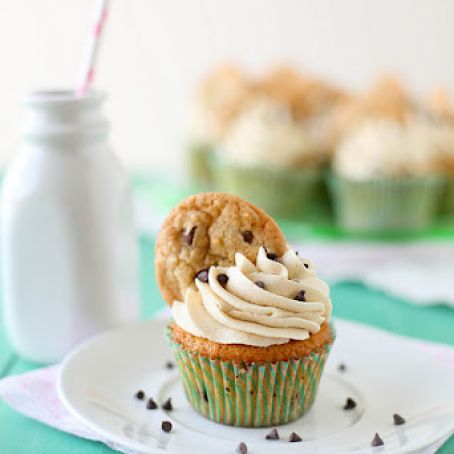 To make the cupcakes, preheat the oven to 350° F. Line two cupcake pans with paper liners (24 total). In the bowl of a stand mixer fitted with the paddle attachment, combine the butter and brown sugar. Beat together on medium-high speed until light and fluffy, about 3 minutes. Mix in the eggs one at a time, beating well after each addition and scraping down the sides of the bowl as needed.


Combine the flour, baking powder, baking soda, and salt in a medium bowl. Stir together to blend. Add the dry ingredients to the mixer bowl on low speed, alternating with the milk, beginning and ending with the dry ingredients, mixing each addition just until incorporated. Blend in the vanilla. Fold in the chocolate chips with a spatula.


Divide the batter evenly between the prepared cupcake liners. Bake for 18-20 minutes, until a toothpick inserted in the center comes out clean. Allow to cool in the pan 5-10 minutes, then transfer to a wire rack to cool completely.


To make the cookie dough filling, combine the butter and sugar in a mixing bowl and cream on medium-high speed until light and fluffy, about 2 minutes. Beat in the flour, sweetened condensed milk and vanilla until incorporated and smooth. Stir in the chocolate chips. Cover with plastic wrap and refrigerate until the mixture has firmed up a bit, about an hour.


To fill the cupcakes, cut a cone-shaped portion out of the center of each cupcake. Fill each hole with a chunk of the chilled cookie dough mixture.


To make the frosting, beat together the butter and brown sugar in the bowl of a stand mixer fitted with the paddle attachment until creamy. Mix in the confectioners’ sugar until smooth. Beat in the flour and salt. Mix in the milk and vanilla extract until smooth and well blended.