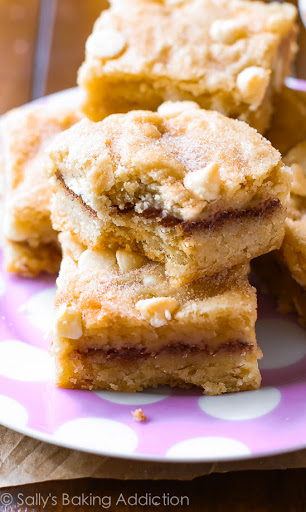 A cross between a chewy blondie and moist butter cake, these blondies are studded with white chocolate chips and ribboned with sweet cinnamon sugar! 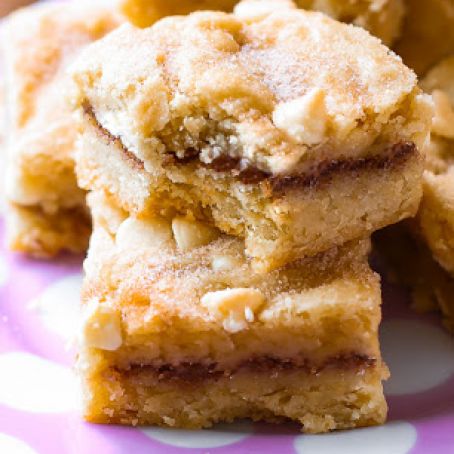 Preheat oven to 350F degrees. Line a 9x9, 11x7, or 9x13 inch baking pan with aluminum foil, leaving enough overhang on the sides to easily pull the blondies out of the pan and cut. I suggest using an 11x7 baking pan - that is what I have been using and the blondies are nice and thick.

In small bowl, combine flour, baking powder, and salt. Set aside. Using a hand or stand mixer fitted with a paddle attachment, beat the butter on high speed in a large bowl. Beat for at least 1 minute until creamy. Add sugars and beat for 2 full minutes on high speed until light and fluffy. Scrape down the sides and bottom of bowl as needed. Beat in the eggs and vanilla on high speed, scraping down the sides and bottom of the bowl as needed. On low speed, beat in dry ingredients until just combined. With a large wooden spoon or rubber spatula, fold in the white chocolate chips.

Spoon half the batter into pan. It will be a relatively thin layer, but try to spread it across the pan evenly. Combine the cinnamon and sugar and sprinkle on top of them bottom layer, reserving 1 Tablespoon for the top. Spread the remaining batter over top. Some of the cinnamon-sugar will mix into the top layer as you spread it, which is fine. Sprinkle the top with remaining cinnamon-sugar.

For a 9x9 or 11x7 baking pan, bake for 30-35 minutes or until golden brown and a toothpick inserted in the center comes out clean. For a 9x13, bake 22-26 minutes or until golden brown and toothpick inserted in center comes out clean. Cool completely for about 1 hour. While the bars are cooling, you can make an optional glaze to go on top.

While the bars are cooling, make the glaze. In small bowl, stir glaze ingredients until smooth. Drizzle over blondies and cut into 24 squares. Blondies stay fresh covered tightly at room temperature for up to 1 week.

Blondies stay fresh covered tightly at room temperature for up to 1 week. Blondies freeze well, up to 3 months.