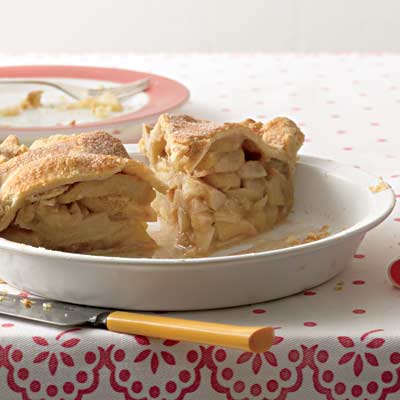 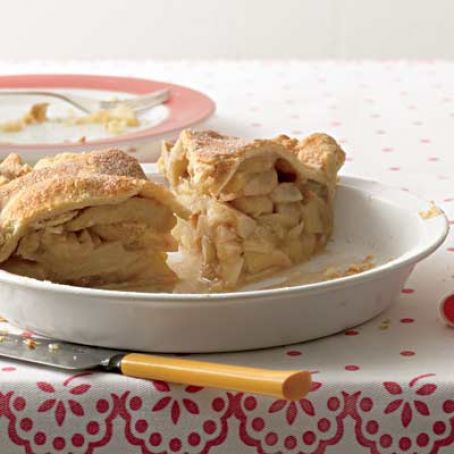 1. Position a rack in the middle of the oven and preheat to 400 degrees F. Line a large baking sheet with foil. In a large bowl, toss together the apples, 2 tablespoons flour, 1 cup sugar, the lemon juice and 1/2 teaspoon cinnamon.

2. In a small bowl, beat the egg yolk with the ice water. In a large bowl, combine the remaining 2 1/4 cups flour and the salt. Add the shortening and 5 tablespoons butter; using your fingertips, blend until the mixture resembles coarse crumbs. Sprinkle with the egg yolk mixture and stir with a fork until the dough just holds together, adding a little more ice water if necessary.

3. On a work surface, gather the dough into a ball, kneading slightly. Divide the dough into 2 pieces, 1 slightly larger than the other, and form into disks. Refrigerate the smaller piece.

4. Lightly flour the work surface. Using a floured rolling pin and working from the center outward, roll out the larger dough disk into a 13-inch round, rotating the dough and dusting the work surface with flour as necessary. Roll the round onto the rolling pin and unroll over a 9-inch pie dish; fit the dough into the dish, letting the excess hang over the edges. Transfer the apple filling into the pie shell in a mound; dot with the remaining 1 tablespoon butter.

5. Scrape the rolling pin and work surface clean, then dust with flour. Roll out the remaining dough into an 11-inch round. Roll the round onto the rolling pin and unroll over the filling. Trim the excess dough, leaving a 1-inch border. Roll up the edges of the crusts and crimp. Brush the top crust with the beaten egg white and sprinkle with the remaining 2 teaspoons sugar mixed with the remaining 1/4 teaspoon cinnamon. Cut 3 vents in the center of the pie. Place on the prepared baking sheet and bake until golden, about 30 minutes. Rotate the pie, reduce the heat to 350 degrees F; and bake until the pie is deep golden, about 30 minutes longer. Transfer to a rack and let cool completely. 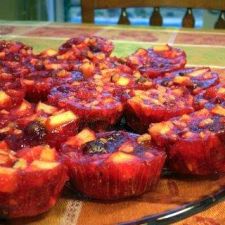