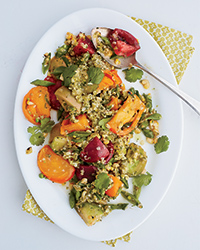 Grilled corn and jalapeño add smoky flavor and heat to the dressing for this terrific salad. The recipe is excerpted from the Portlandia Cookbook, which comes out in early 2015 and is based on the food-obsessed satirical TV show starring Fred Armisen and Carrie Brownstein. 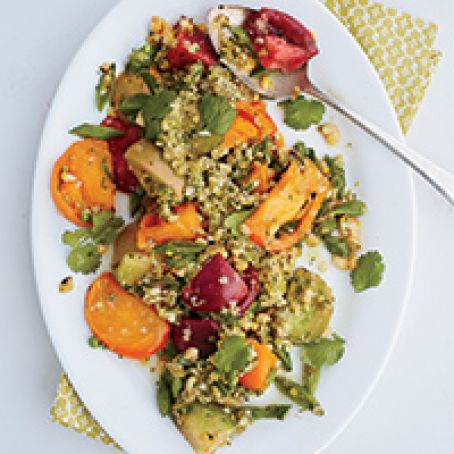 Light a grill or preheat a grill pan and brush the grate or pan with canola oil. Lightly brush the jalapeño and corn with canola oil and grill over moderate heat, turning occasionally, until lightly charred all over, about 15 minutes. Transfer to a plate to cool. Peel, seed and chop the jalapeño. Cut the corn kernels off the cob; discard the cob.
In a mini processor, combine the 2 tablespoons of canola oil with the olive oil, lime juice, scallion whites, chopped cilantro, jalapeño and half of the grilled corn kernels. Pulse until a chunky dressing forms. Season with salt.
In a large bowl, toss the tomatoes with the snap peas, scallion greens, the remaining corn and half of the dressing. Toss to coat and transfer to a serving platter. Spoon the remaining dressing over the salad and garnish with cilantro leaves.

MAKE AHEAD The jalapeño dressing can be refrigerated overnight.