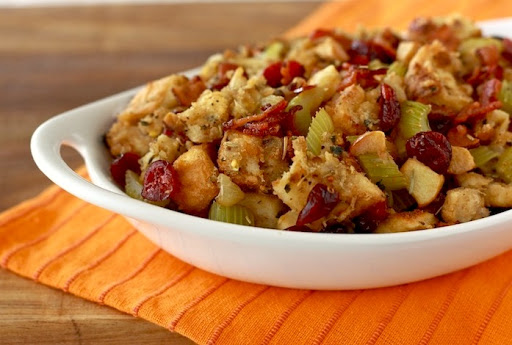 Preheat oven to 275F. Spread bread cubes on a baking sheet and bake until evenly toasted, tossing it a few times.
Should take around 45 minutes.
Transfer toasted bread cubes to a large bowl.

Heat oil in a large nonstick skillet over medium heat.
Once heated, add butter. When melted, add onions and garlic, and cook over medium heat until lightly browned.
Add the celery and one tablespoon of broth, and cook for about 8 minutes.
Reduce heat to low, and add in allspice, rosemary and thyme, and cook until the vegetables are softened.

Transfer the cooked vegetable mixture into the large bowl with the toasted bread.
Add in cranberries and chopped apples.
Pour the broth in, and mix well to coat all bread cubes.
Add in eggs and toss until evenly moistened.
Season with salt and black pepper.

Transfer stuffing mixture to a lightly buttered baking dish and cover with foil.
Bake at 325F for around 40 minutes.

While the stuffing is baking, cook the bacon pieces in the skillet until evenly browned.
Set aside.

After around 40 minutes of baking, remove the foil cover and broil for a few minutes until top of stuffing turns brown and crispy.
Remove from oven and top with the bacon pieces before serving.

Notes:
1. You can toast the bread the night before. The toast will keep well in an airtight container in a cool place.
2. If you prefer extra-moist stuffing, add more broth or water.
3. For a vegetarian version, just replace the bacon with mushrooms, and the chicken broth with vegetable broth. 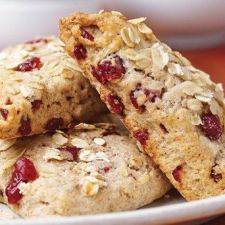