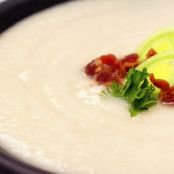 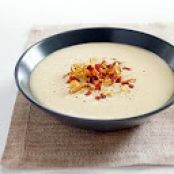 Using a sharp knife, trim most of the roots off the end of the leek, leaving enough so that the leek remains attached at the bottom. Cut each leek lengthwise into halves or quarters, as desired. Run leeks under cold running water, using fingers to loosen and remove any dirt or sand from between the leaves.

In a heavy skillet or saute pan that has a tight fitting lid, melt the butter over medium heat. Add the leeks to the skillet with any water that is clinging to the leaves from washing them. Cook the leeks, stirring occasionally, for 5 minutes. Add the stock and thyme and lower the heat to medium-low. Braise the leeks, covered, for about 10 minutes, or until the leeks are very tender. Season with salt and pepper and serve.

This recipe yields 4 servings as a side dish.