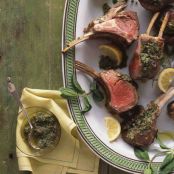 Rack of Lamb with Mint and Capers 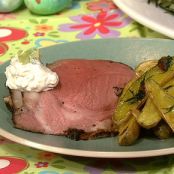 Michael Symon's Leg of Lamb with...

Season the shanks generously on all sides with the salt and black pepper.

Place the flour on a large plate. Dredge the shanks in the flour and shake to remove any excess.

Remove from the heat and discard the bay leaves. Transfer the shanks to a large plate and let rest until cool enough to handle. Transfer the braising liquid and vegetables to a medium pot and bring to a boil. Reduce the heat to medium-low and simmer until reduced by 1/3 in volume, about 30 minutes, skimming the top occasionally to remove any scum. Remove from the heat.

To make the Gorgonzola Crust, combine the bread crumbs, Gorgonzola cheese, egg, thyme, 1/4 teaspoon salt, and 1/4 teaspoon black pepper in the bowl of a food processor. Pulse several times until the mixture resembles wet sand. Transfer to a medium bowl.

Line a baking dish with foil.

When the shanks are cool, coat evenly with the Dijon mustard. Dredge 1 at a time in the Gorgonzola crust, pressing down to adhere about 1/3 cup of the crust to the meat. Reserve the remaining crust mixture. Place the shanks in the prepared baking dish and bake until golden brown, 20 to 25 minutes.

Add the remaining crust mixture to the reduced braising liquid and simmer over medium heat for 6 minutes. Remove from the heat. With a hand-held immersion blender or in batches in a food processor, puree the liquid on high speed. Cover to keep warm until ready to serve, then transfer to a gravy boat or decorative bowl.

Remove the shanks from the oven. Drizzle with the sauce, and pass the remaining sauce at the table. Serve with Rosemary Creamed Potatoes. Serve immediately.