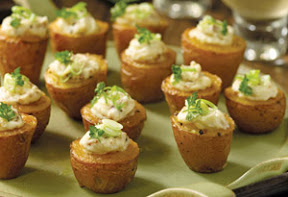 This is a textbook example of the "work early, relax later" school of appetizers. Cheesy, twice-baked potatoes get salty crispness from bacon bits and warm spice from Spanish pimento. 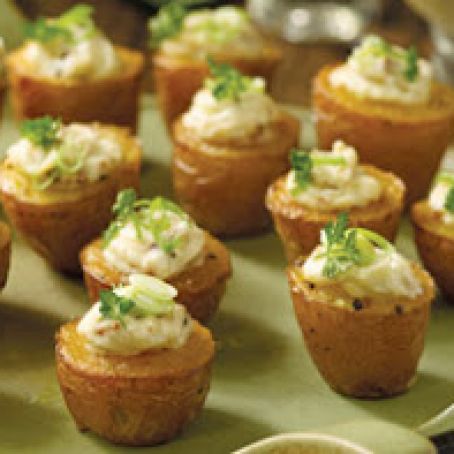 Leaving the skins on, cut the potatoes in half crosswise, and place cut side down on a parchment-lined baking sheet. Drizzle with the olive oil, sprinkle with salt and pepper, and toss until evenly covered. Bake for 20 minutes, until cooked through. Cool completely.

Cook the bacon over medium-low heat until crispy, about 10 minutes. Drain on paper towels, and then mince.

Using a sharp knife, trim a tiny slice off the round end of each potato half, so that they can stand upright. Using a melon baller or a paring knife and small spoon, carefully scoop enough potato flesh from each potato half to form little cups. Mash the scooped-out potato into the cheese mixture along with the butter and cream.

Spoon the mashed stuffing into a pastry bag or a freezer-strength zipper bag with a corner snipped off, and pipe it into the potato cups. Put the potatoes on a baking sheet, cover with plastic wrap, and refrigerate for up to 1 day.

Bake the potatoes until heated through, about 10 minutes.