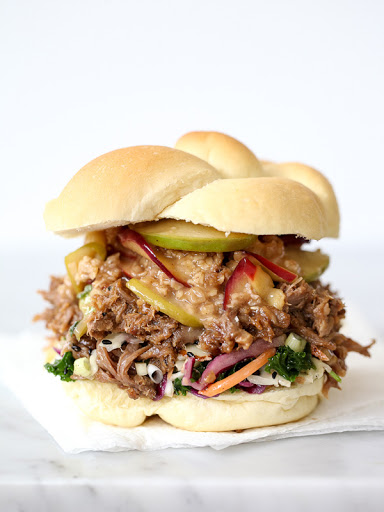 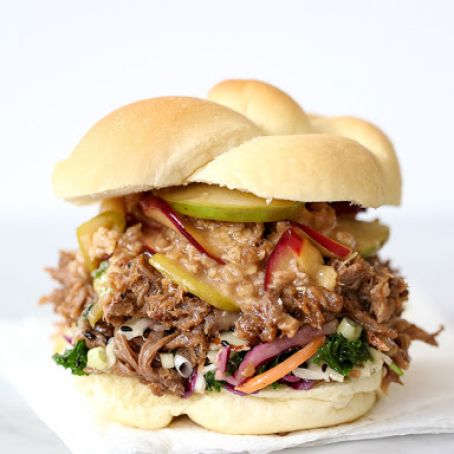 Preheat the oven to 300 degrees F.

Generously season the pork butt on all sides with kosher salt and freshly ground black pepper. Heat the vegetable oil in a large dutch oven over medium high heat and sear the pork until a nice crust forms, about 5 minutes for each side. Remove from pan and set aside.

Add the onions, Asian pear and garlic and cook for about 3 minutes. Nestle the pork butt into the onion mixture.

Mix the beef broth, brown sugar, rice vinegar, Asian chili sauce and sesame oil in a large bowl or 4-cup measuring cup. Pour the mixture over the pork and onion mixture, cover and cook in the oven for 4 hours or until the meat is tender and falling apart.

Transfer the pork to a large bowl and let cool. Shred with two forks or your fingers.
Cook the remaining sauce over medium heat until reduced by half. Blend with an immersion blender until smooth. You should have about 4 cups of sauce. Add 3 cups of sauce to the shredded pork an mix well. Add more sauce if desired. Reserve the extra sauce for dipping.

Caramel Apple Crumble Topping:
Mix the apples with the lemon juice in a medium bowl and set aside.
Melt the butter in a small saucepan over medium heat. Add the brown sugar and stir to mix. Cook for 2 minutes, stirring continuously. Stir in the cream until smooth. Add the apples and cook for about 3-4 minutes. Mix in the oats, cinnamon and salt. Remove from heat. 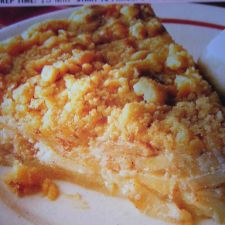