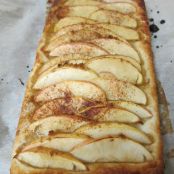 Preheat the oven to 400 degrees.

Generously butter 6 (1/2-cup) ramekins with 1 1/2 teaspoons of the butter. Combine the ground walnuts and 1 teaspoon flour in a small bowl. Sprinkle the dish with the walnut-flour mixture, and knock out the excess. Set aside.

Mix egg yolks, salt, and pepper in a small bowl. Add the egg yolks to the sauce, and whisk well to blend. Fold in the Stilton and Gruyere.

Using an electric mixer, beat the egg whites with the cream of tartar in a large clean bowl until stiff but not dry. Fold one-third of the whites into the egg yolk mixture to lighten. Fold in the remaining whites, being careful not to overmix. Divide the souffle mixture among the 6 prepared dishes.

Place the souffles on a baking sheet and place in the oven. Reduce the heat to 375 degrees and bake until puffed, golden and gently set in center, about 15 to 20 minutes. Remove from the oven. Spoon Pear Compote over each and serve immediately.

Pear Compote: In a medium, heavy saucepan, combine the wine, sugar, and clove over medium-high heat. Cook, stirring, until the sugar dissolves. Add the pears and simmer until tender, about 5 minutes. Transfer the pears to a medium bowl. Bring the liquid to a simmer and cook until thickened, about 5 minutes. Remove from the heat and discard the clove. Pour the syrup over the pears and let cool to room temperature. Serve with the Pear, Stilton, and Walnut Souffles. (Makes about 1 cup) 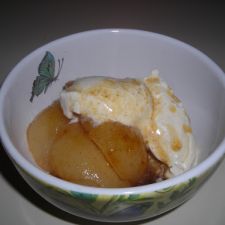