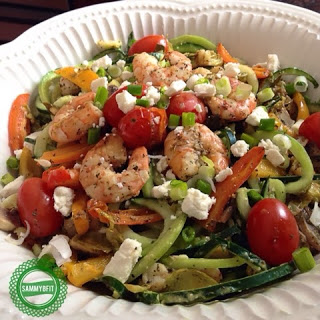 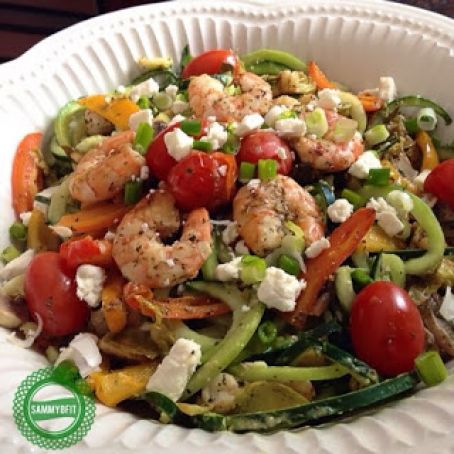 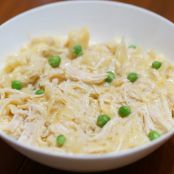 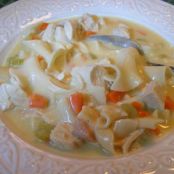 Place all ingredients for the sauce into a blender or processor and process until it reaches a creamy consistency. Spiralize the cucumbers and place them into a strainer. This will help the water that is naturally found in a cucumber to drain while you're cooking the shrimp.


Heat a non-stick skillet over medium heat. Once heated, spray with non-stick cooking spray and add the shrimp and remaining ingredients. Squeeze the half of a lemon over the shrimp mixture and season with Mrs. Dash and salt & pepper, if preferred. Allow to cook until the shrimp has turned pink and the peppers have softened.


Place the spiralized cucumbers into a large bowl with the sauce and toss to coat. Top with the shrimp mixture, additional feta cheese & chopped scallions, if preferred. You can always heat the cucumbers up, if you prefer. I ate them raw and they are crispy, just as a cucumber naturally is. If you would prefer them heated- you can either nook them for 30-60 seconds in the microwave or toss them into a non-stick skillet, sprayed with cooking spray, and saute them for 1-3 minutes. I cannot attest to the texture and taste, but I can't imagine it would be much different than sauteing spiralized zucchini 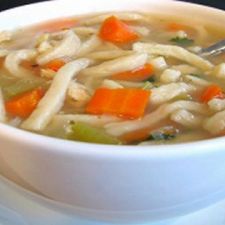