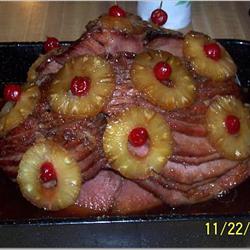 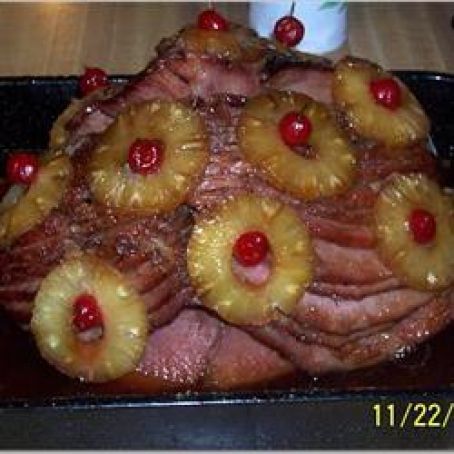 1.Preheat oven to 400 degrees F (200 degrees C).
2.Use a sharp knife to score the ham 1/4 inch deep in a diamond pattern. Place in a good sized roaster with the fat side up, and stud in a decorative manner with the whole cloves...be sure to use plenty. Pack the top of the ham with the whole pound of brown sugar to coat the surface as thickly as possible. Some may fall off into the pan, but that can not be helped. Leave it there to sweeten the basting juices needed in later steps.
3.Roast, uncovered, until the sugar begins to melt, about 20 minutes. During this time, mix together the pineapple juice and sangria. When the sugar has begun to melt, pour one cup of the wine mixture over the ham, and return the ham to the oven for 40 minutes. I often tent the ham with foil at some point, but my mother never did.
4.After one hour in the oven, baste the ham with a second cup of the wine mixture, stirring it into the pan drippings. Return the ham to the oven for 2 more hours, basting after the first hour with the remaining wine mixture.
5.Lower the oven temperature to 325 degrees F (165 degrees C), and baste the ham every 20 minutes with the pan drippings for the final hour of cooking. A meat thermometer should read 160 degrees F (65 degrees C) before serving.