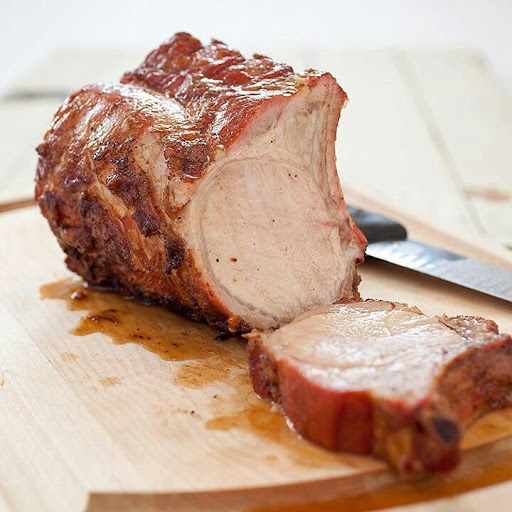 Why this recipe works:

We chose the loin’s center-cut roast for our bone-in pork rib roast recipe for its great ease of preparation: Because the meat is a single muscle attached along one side to the bones, there was no need to tie the roast for a tidy presentation. Salting the meat extracted much of the pork roast’s liquid, which ensured that our pork roast recipe would produce a deeply browned, crisp crust. Grilling the pork, covered, on the cooler side of the grill allowed the meat to cook through slowly by indirect heat without risk of burning the exterior.

If you buy a blade-end roast (sometimes called a “rib-end”), tie it into a uniform shape with kitchen twine at 1-inch intervals; this step is unnecessary with a center-cut roast. For easier carving, ask the butcher to remove the tip of the chine bone and to cut the remainder of the chine bone between the ribs. For instructions on carving the roast, see step-by-step below. 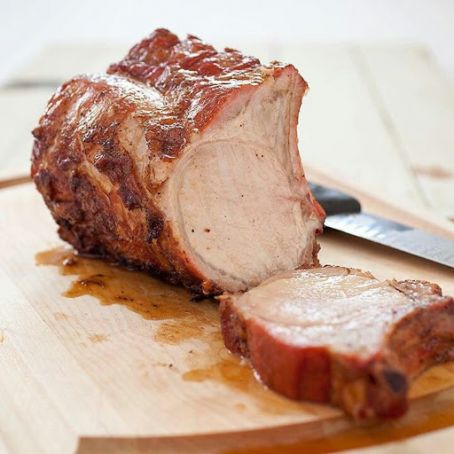 1. Pat roast dry with paper towels. If necessary, trim thick spots of surface fat layer to about ¼-inch thickness. Using sharp knife, cut slits in surface fat layer, spaced 1 inch apart, in crosshatch pattern, being careful not to cut into meat. Sprinkle roast evenly with salt. Wrap with plastic wrap and refrigerate for at least 6 hours, up to 24 hours.


2. One to 2 hours before grilling, submerge wood chips in bowl of water to soak.


3. Place soaked chips in 9-inch disposable aluminum pie plate and set on primary burner of grill (burner that will stay on during grilling). Position cooking grates over burners. Turn all burners to high and heat grill with lid down until very hot, about 15 minutes. Turn primary burner to medium-high and turn off other burner(s). Scrape grate clean with grill brush.


4. Sprinkle roast evenly with pepper. Place roast on grate with meat near, but not over, primary burner and bones facing away from heat. Open top vents halfway and cover grill, positioning vents over meat. (Initial grill temperature should be about 425 degrees.) Grill roast until instant-read thermometer inserted into thickest part of meat registers 140 degrees, 1¼ to 1½ hours.


5. Transfer roast to carving board, tent loosely with foil, and let rest for 30 minutes (internal temperature should rise to about 150 degrees). Carve into thick slices by cutting between ribs. Serve, passing salsa separately (if using).

The Weirdest Roast Ever


We've long known that the fat and connective tissue that surround bones lend moisture and richness to bone-in meats, while the mere presence of bones slows cooking and limits evaporation of juices. But it seemed to us that there must be other reasons why bone-in meat tastes better than the boneless kind. So when two meat experts suggested that some flavor might migrate from the rich marrow at the center of bones through the porous bone itself and right into the meat, our curiosity was piqued. We devised a test to see if this theory made any sense.

EXPERIMENTTo fabricate a neutral-flavored pork substitute, we made a big batch of mashed potatoes and seasoned it with 8 percent butter and 1 percent salt by weight, amounts that mimic the fat and salt found in our pork roast. Then we formed the potatoes into two equal-size, oblong shapes on a baking sheet. Next we scraped three pork rib bones clean of all fat and connective tissue, so that the only flavor would be from the marrow, and placed these bones over the top of one of the "roasts." To create a control, we left the other mashed-potato "roast" alone. Then we cooked both of our imitation roasts in a 425-degree oven for 1 1/2 hours. After a 20-minute rest, we compared the plain sample to the one with bones.

EXPLANATIONAs bones are heated, they expel moisture, salt, amino acids, and nucleotides (the last two being responsible for the "meatiness" that tasters detected) from the richly flavored marrow. However, since those water-soluble flavor molecules must penetrate through a thick layer of bone to reach the meat, the diffusion process is slow and the amount of flavor contributed is not enormous. Nevertheless, when coupled with the considerable moisture- and flavor-enhancing benefits of the fat, and connective tissue around the bones, the process certainly provides another good reason to opt for bone-in.


BONE-IN MASHED POTATO "ROAST"Crazy as it sounds, our imitation roast proved that some flavor from the bone can migrate into the meat.

TOP-CHOICE: Center-Cut Rib Roast
A cut from the center of the loin that contains mostly loin muscle (and sometimes a bit of tenderloin) attached to a neat row of curved rib bones.
Pros: Good flavor; easy availability; no tying necessary
Cons: None when cooked bone-in; tendency to dry out when boneless

CLOSE SECOND: Blade-End Roast
Also knows as the "rib-end roast," this cut from the shoulder end of the loin is a hodgepodge of small muscles.
Pros: Exceptionally rich flavor
Cons: Spotty availability; must be tied; tricky to slice cleanly


Our Grill-Roasted Bone-In Pork Rib Roast can be served on the bone in thick slabs, or the meat can be removed from the bone and sliced into thinner pieces.


FOR THICK BONE-IN CHOPS
Stand the roast on the carving board with the bones pointing up, and cut between the bones into separate chops.

FOR THIN BONELESS SLICES
1. Holding the tip of the bones with one hand, use a sharp knife to cut along the rib to sever the meat from the bones.

2. Set the meat cut side down on the carving board and slice across the grain into 1/2-inch-thick slices. 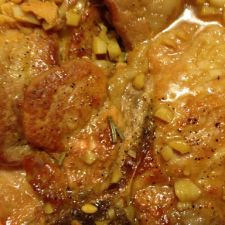