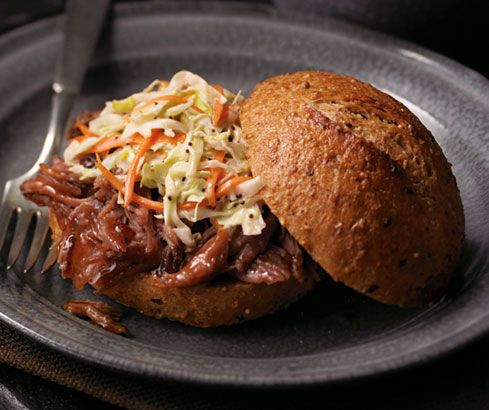 Why this recipe works:

It’s often difficult to imbue pulled pork with rich, smoky flavor when cooking on a gas grill. We cut our pork butt into three pieces to increase the surface area that the smoke could cling to. After salting the pork overnight, we take it directly from the fridge to the grill: The meat’s cool temperature allows more smoke to condense onto its surface.

Instead of inundating the meat with smoke at the beginning, we get the most out of the wood chips by soaking half of them in water to delay when they begin to smoke. Our foil packets are the right size and shape to sit on the grill, and they have just the right size and number of openings to allow in enough oxygen so that the chips smolder, but not so much that they catch fire. Finally, we stir together a bright and spicy vinegar sauce that highlights the pungent smoke flavors of our pulled pork.

Pork butt roast is often labeled Boston butt in the supermarket. We developed this recipe with hickory chips, though other varieties of hardwood can be used. (We do not recommend mesquite chips.) Before beginning, check your propane tank to make sure that you have at least a half-tank of fuel. If you happen to run out of fuel, you can move the pork to a preheated 300-degree oven to finish cooking. Serve the pulled pork on white bread or hamburger buns with pickles and coleslaw. 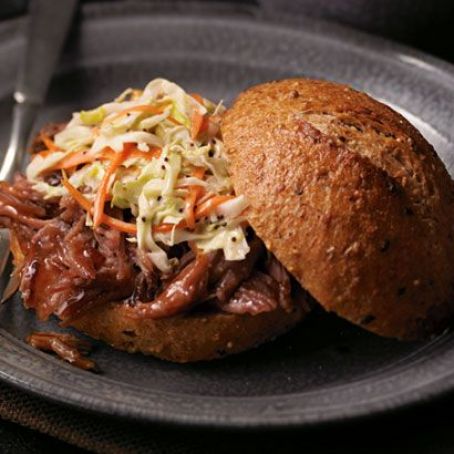 1. FOR THE PORK: Combine 5 teaspoons salt, 2 1/2 teaspoons pepper, paprika, and sugar in small bowl. Cut pork against grain into 3 equal slabs. Rub salt mixture into pork, making sure meat is evenly coated. Wrap pork tightly in plastic wrap and refrigerate for at least 6 hours or up to 24 hours.

4. Clean and oil cooking grate. Place pork on cooler side of grill, directly over water pans; cover; and smoke for 1 1/2 hours.

5. Transfer pork to disposable pan. Return disposable pan to cooler side of grill and continue to cook until meat registers 200 degrees, 2 1/2 to 3 hours.

6. Transfer pork to carving board and let rest for 20 minutes. Pour juices from disposable pan into fat separator and let stand for 5 minutes.

What Were We Smoking?


In our quest to get the richest smoke flavor possible into pulled pork made on a gas grill, we experimented with other sources of smoke beyond the traditional wood chips. Our conclusion? Getting things like cinnamon sticks to smolder on the grill is fun and quirky, but wood chips still provide the best smoke flavor.


PANTRY FINDS: When wood smolders, the cellulose, hemicellulose, and lignin compounds that it contains break down and flavor food. So we looked for pantry items with a similar makeup to see if they would work any better. Cinnamon sticks, dried garbanzo beans, and walnut shells all produced smoke, but it was weak—almost sweet—rather than bold, as you’d expect with wood-smoked barbecue.

PUCKS, BRICKS, AND PELLETS: Made by compressing wood chips and sawdust, smoker pucks and bricks were hard to arrange on the gas grill, and they usually caught fire. Wood pellets and sawdust-type products, sealed in a foil packet according to their instructions, required frequent refueling for pulled pork—they would be fine for a quickly smoked pork chop but were not worth the effort here.


The Importance of a Just-So Packet


In the past, we’ve found that sealing wood chips in a foil packet with a few slits cut into it is the best method for producing smoke on a gas grill. We confirmed that that’s still the case, but we also found that our directions for making a packet have been too vague. By ironing out the details, we ensure consistent, steady smoke from one packet to the next.


Two 2-inch-long slits let in just enough oxygen for a steady smolder. (Be careful that the slits don’t get blocked by the grate’s bars.)


Since the pork can absorb only so much smoke at any moment, soak half of the chips to draw out the smoke over a longer period.


In addition to getting the details of the wood chip packet just right, we made several other small adjustments that together paid off with big smoky flavor.

ADD HUMIDITY: Placing two water-filled pans in the grill creates a humid environment that keeps the surface of the meat moist, which allows for better absorption of water-soluble smoke compounds.

PUT COLD PORK ON GRILL: Smoke will condense more easily on a cold surface, so we put the pieces of pork on the grill straight from the fridge rather than bringing it to room temperature as many recipes suggest.

CATCH THE SMOKY JUICES: When the smoke peters out, putting the pieces of pork in a pan saves smoky juices that can be added back before serving. 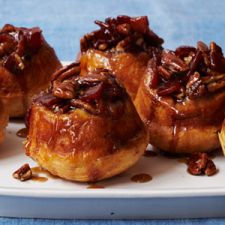