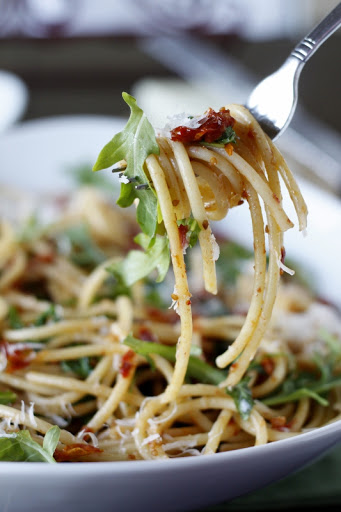 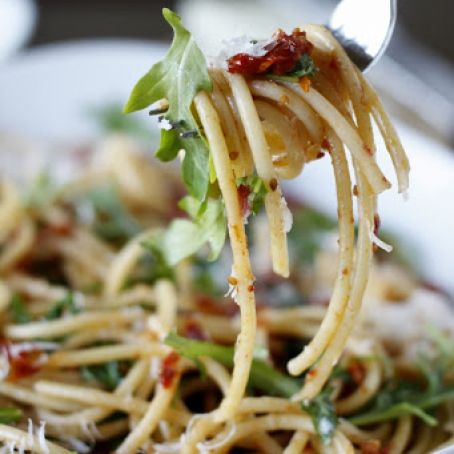 1. Bring a large pot of water to a rolling boil and salt generously.
2. WHILE the water is heating, warm the olive oil in a saute pan placed over medium heat. Add pancetta and saute, stirring frequently for 8-10 minutes OR until pancetta begins to render its fat and turn somewhat crispy. Stir in the tomatoes and cook. Stirring occasionally for about 5 minutes OR until they are heated through. Turn off heat, cover and keep sauce warm.
3. Add pasta to boiling water, stir to separate the noodles. Cook according to package directions until al dente. Drain the pasta in a colander set in the sink, reserve about 1 cup of the cooking water.
4. Transfer pasta to frying pan and gently toss the pasta and sauce to combine. Add a splash or two of the cooking water if necessary to loosen the sauce. Add arugula by the handful and continue to toss for a minute or two until the greens are slightly wilted.
5. Transfer the dressed pasta to shallow serving bowls and sprinkle with pecorino cheese.
Serve immediately.


*Cook’s Note:
To make slow roasted cherry tomatoes: heat the oven to 275 degrees. Cut the tomatoes in 1/2 and arrange them in a single layer on a rimmed baking sheet. Drizzle 1/4 cup of extra virgin olive oil over tomatoes. Scatter 2 thinly slices cloves of garlic over. Season with salt/pepper. Roast for 2-3 hours OR until tomatoes have collapsed and shriveled but are still moist. Let cool and use immediately OR store in a tightly lidded container in the refrigerator for up to 1 week.