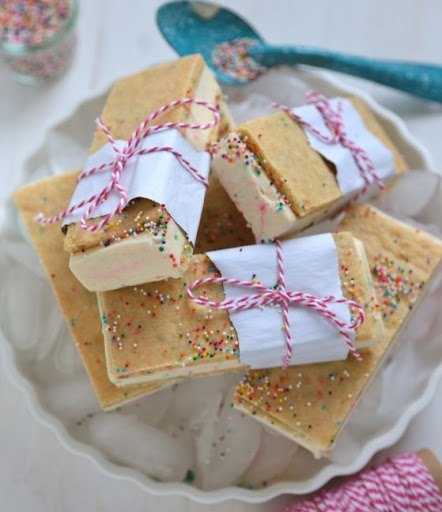 Make it a party with these Homemade Birthday Cake Ice Cream Sandwiches. 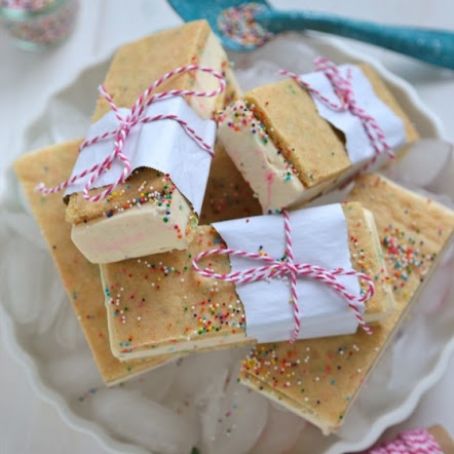 Prepare ice cream maker bowl according to directions and freeze at least 24 hours in advance of making ice cream. In a sauce pan, combine vanilla bean seeds, whipping cream, milk, 1/4 cup sugar, corn syrup and salt. Whisk together until smooth. Heat over stove, whisking frequently, until the mixture reaches 175 degrees. Remove the pan from the heat.

In a small bowl, whisk the remaining sugar and egg yolks together until light and fluffy. Slowly temper 1 cup of the hot cream mixture into the egg yolks, whisking the cream into the egg yolks slowly until they are completely incorporated. This will prevent the eggs from scorching and curdling. Once the egg yolks are tempered, pour the mixture back into the sauce pan and reheat the mixture until it reaches 180 degrees. This will cook the eggs and kill any bacteria. Remove from the heat and pour into a large bowl. Cover the bowl with plastic wrap - but leave a small vent to allow the steam to escape. Place the ice cream mixture into the fridge to cool completely, over night. While the batter chills, prepare the birthday cake blondies for the following day.

Preheat oven to 350 degrees. Spray a rimmed baking sheet with non-stick spray, then line with parchment paper (NOT wax paper) and leave 2 inches of parchment paper hanging over the short edges of the pan. Spray the parchment paper with non-stick spray as well.
In a large bowl whisk together melted butter and sugar. Whisk in eggs and salt. Whisk in flour and yellow cake mix until just smooth. Spread into a thin layer all over to the edges of the pan. Bake for 10-12 minutes or until the blondies begin to pull away from the sides of the pan.
Remove from oven and let cool in the pan for 5 minutes. Using the overhanging paper, gently remove the brownies from the pan and allow to cool completely on a wire rack. When completely cool, cut the brownies length wise into two long pieces. Place one half of the blondie back into the pan and spread the softened ice cream and spread until smooth and even. Top with other half of the brownie. Cover tightly with plastic wrap and freeze for about two hours, until set. Cut into 6-8 sandwiches. Wrap each sandwich with parchment paper for storage and place in an air tight container until devoured.

To make and assemble:

Remove ice cream batter from fridge and prepare according to ice cream maker's directions. In the last 30 seconds of the freezing process, add in the sprinkles. Adding them in at the last step prevents them from melting and the colors bleeding into the ice cream.

Straight from the ice cream bowl, spread the softened ice cream onto one half of the birthday cake blondie and smooth out. Top with other half of the birthday cake blondie that was set aside. Clean up any visible edges that over flowed with ice cream. Cover with plastic wrap and then with foil, and immediately place in freezer for at least 2 hours. Once completely frozen, using a sharp knife, slice into ice cream sandwiches. These will make 6 standard size sandwiches, but they are very rich - so make them into 12 by halving the sandwiches again.

Wrap tightly in the freezer for storage so they do not crystalize. Devour and enjoy!