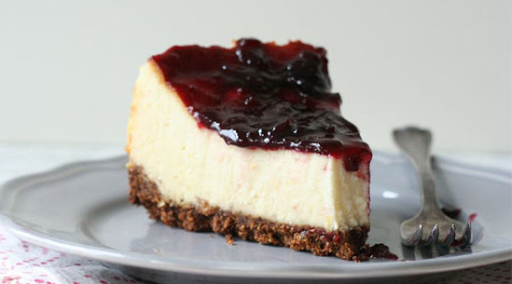 Things that are better in a restaurant: a decent slice of cheesecake, creamy risotto, fresh sushi. Usually it’s due to the fact that a restaurant has better equipment (a water bath for that cheesecake), time (patience for the risotto) or just a good eel guy. But we don’t like to have to rely on someone else to satisfy our sugar cravings. So we challenged our recipes editor to come up with a foolproof cheesecake that doesn’t require industrial-style equipment to make. Thankfully, our girl’s good. Her beauty of a recipe requires only a food processor for silky-smooth results.

2. Make the crust: In a large bowl, mix the graham cracker crumbs with the sugar and melted butter to combine. Press the mixture evenly into the base of an 8-inch springform pan. Bake until set, 15 to 20 minutes. Cool.

3. Make the cheesecake batter: In the bowl of a food processor, pulse the cream cheese, sour cream, heavy cream and sugar until well combined. Scrape well after mixing. Add the eggs one at a time, pulsing and scraping well after each addition. Add the zest, vanilla and salt, and pulse to combine.

4. Pour the batter over the cooled crust and transfer to the oven. Once the cheesecake is in the oven, reduce the temperature to 300°. Bake until the cheesecake is set but still slightly jiggly in the center, about 1 to 1½ hours.

6. Run a knife around the edge of the cooled cheesecake, then release it from the springform pan. Top with cherry preserves, if using. Slice and serve.