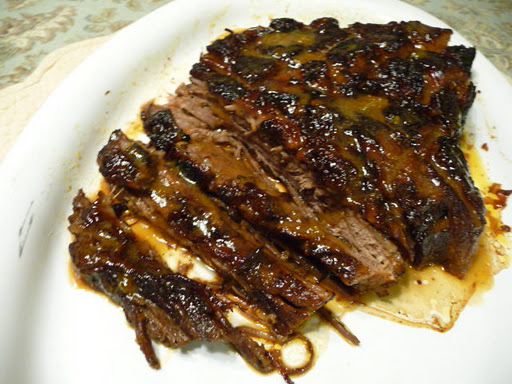 May be served with wide noodles and green peas. 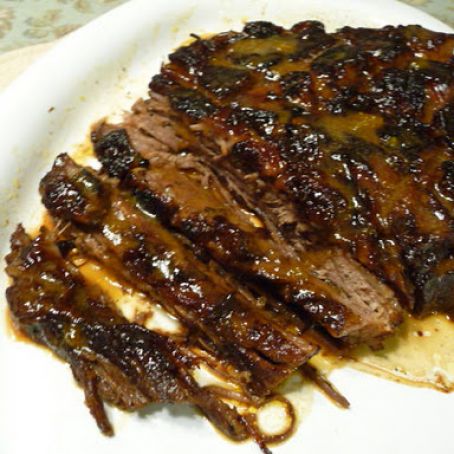 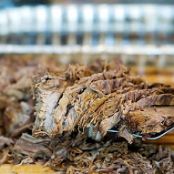 RUB:
Mix all rub ingredients in a small bowl.
Rub brisket all over with spice reb. Cover and chill for at least 2 hours or overnight. Let stand at room temperature for 1 hour before continuing.

Heat 1 tablespoon of oil in a large wide oven ready pot over high heat. Add brisket, fat sid down. Cook undisturbed until well browned, 5-6 minutes. Turn brisket over and cook until browned about 3 minutes, then remove brisket and transfer to a plate.

Reduce heat to medium and add remaining 1 tablespoon of oil. Add onion and garlic and cook stirring occasionally, until onion is slightly golden, about 5 minutes.

Add broth and all remaining ingredients. Bring liquid to a simmer. Return brisket to the pot, cover and transfer to the oven.

Braise until brisket is very tender to the touch but still holds its shape, about 4-1/2 hours. Using a large spatula, transfer brisket, fat side up, to a large plate.

Strain braising liquid into a large bowl. Return liquid to pot, bring to a simmer, and cook until reduced to 2 cups, about 15 minutes.

IF DOING AHEAD:
Brisket can be made 2 days ahead. Cook as described above, return brisket, fat side up, to the pot with reduced braising liquid, and chill for keeping.
To reheat, bring liquid and brisket to a simmer and rewarm brisket before proceeding.

GLAZE:
Transfer 1/4 cup of braising liquid to a blender. Add jam and burbon and puree until smooth. Season with salt and pepper to taste.

Preheat broiler. Put brisket on a broiler pan. Spread 3-4 tablespoons of glaze on top of brisket with the back of a spoon. Broil brisket until browned and glazed, watching carefully to prevent burning 4-5 minutes.

As an option: leave brisket in braise liquid, with top above liquid, glaze and then broil. Time should be about the same.

Transfer brisket to a cutting board. slice against the grain and transfer to a large platter. Ladle braising liquid over brisket, drizzle remaining glaze on top.

The extra braise liquid and glaze may be put on the table for those who desire more. 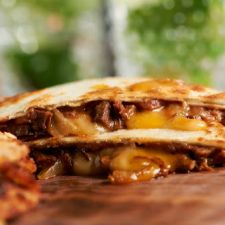