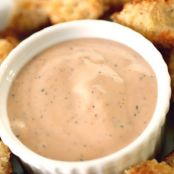 Using a sharp thin-bladed knife and beginning at one end of the ham, carefully cut a 2-1/2-in. circle about 6 in. deep; remove cutout. Cut a 1-1/2-in. slice from the end of removed piece; set aside.

Continue cutting a 2-1/2-in. tunnel halfway through ham, using a spoon to remove pieces of ham (save for another use). Repeat from opposite end of ham, cutting and removing ham until a tunnel has been cut through entire length of ham.

In a small skillet, saute onion in butter until tender. In a large bowl, combine the stuffing mix, pecans, parsley, egg substitute and mustard. Stir in onion. Stuff ham; cover end openings with reserved ham slices. Place in a shallow roasting pan
.
Bake, uncovered, at 325° for 1-1/4 hours. In a small saucepan, combine honey and orange juice concentrate; cook and stir for 1-2 minutes or until blended. Brush over ham. Bake 30 minutes longer or until a meat thermometer reads 140°.

For sauce, combine the brown sugar, flour, mustard and raisins in a saucepan. Gradually add water and vinegar. Bring to a boil; cook and stir for 1-2 minutes or until thickened. Serve with ham.

Editor’s Note: Two fully cooked boneless ham halves can be substituted for the whole ham. Simply hollow out each ham; loosely spoon stuffing into each half, then bake as directed.