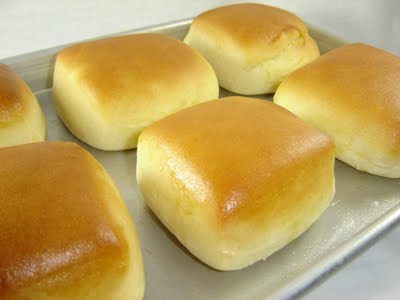 I ate them with cinnamon honey butter.

I shaped my rolls by rolling out the dough into a rectangle, about 1/2-inch thick, then I folded the rectangle in half, making it about 1-inch thick. I used my rolling pin and rolled over the dough, ever so gently, just to seal the two halves together. I then used a dough scraper and cut the rolls into squares and placed those on my greased baking sheet. I cut the recipe in half and I got exactly 12 big rolls and baked them for 16-17 minutes. In order to get the 5-6 dozen rolls like the recipe states, you would have to make really small rolls. 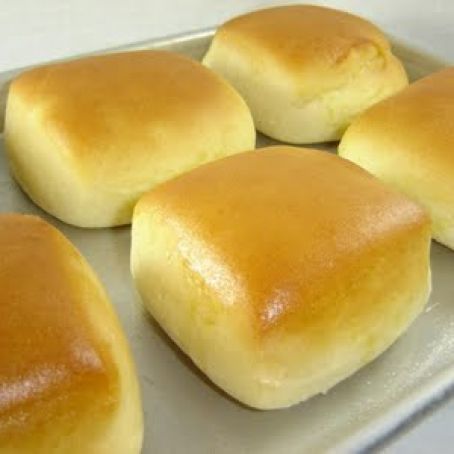 Dissolve yeast in warm water with a teaspoon of sugar, in the bowl of a stand mixer. Once yeast has dissolved, add milk, sugar and 2 cups of flour. Beat thoroughly on medium speed. Let stand until foamy (about 2 minutes). Add melted butter, eggs and salt. Beat well.

Add in another 5 cups of flour, slowly, to form a soft dough. *NOTE* Do not use more than 7 cups of flour total. The dough will be very soft and somewhat sticky, you may think it needs more flour, but it does not.

Knead dough on a floured surface, until it is smooth and satiny. ( I kneaded mine in my stand mixer with the dough hooks, for about 4 minutes) If you knead it with your hands, you will need to grease up your hands with some cooking spray, to help the dough from not sticking to your hands.

Once kneaded, place into a large, greased bowl. Place dough inside, and turn over to grease top. *NOTE* Again, dough will be sticky so you may need to grease your hands to handle while putting dough in the bowl to let rise. Cover, and let rise in a warm place until doubled in size.

Once dough has risen, remove from bowl and place onto a lightly floured surface. Lightly flour a rolling pin, and roll dough out into a large rectangle, that is a 1/2 inch thick. Carefully handling dough, fold the rectangle in half, to form a smaller, 1 inch thick rectangle. Using a pizza cutter, slice dough into 24 large squares or 48 small squares. Place squares onto greased cookie sheets. Cover, and let rise again, until doubled in size.

Bake rolls at 350 for 16-18 minutes, or until lightly golden on top. Remove from oven, and immediately brush tops with butter. Serve rolls with Cinnamon Honey Butter.