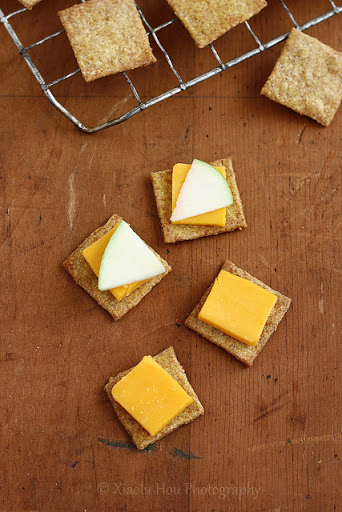 Making my own "wheat thins" turned out to be even easier than I expected. The dough was a cinch to mix up. Thus the hardest part was just rolling and cutting out the crackers (which wasn't very hard at all). Really nailed the flavor. My only warning to you is that these disappear fast (I ate half the batch before P even got home). Better just make a double or triple batch to begin with 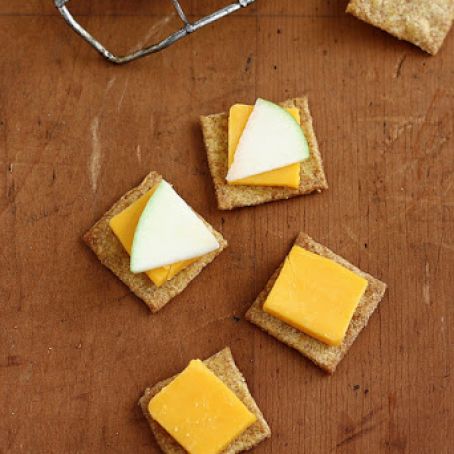 Combine the flours, sugar, salt, paprika, turmeric, garlic powder, and onion powder, if using, in a medium bowl. Stir to combine. Cut the butter into small pieces and mix it into the dry ingredients thoroughly, using your fingers, a pastry blender, a mixer, or a food processor. A 3 tablespoons of water to the flour mixture, mixing just until smooth. If dough is too dry, add remaining water a teaspoon at a time until all the flour is incorporated. Cover and chill dough for 5 to 10 minutes.

Divide the dough into 4 pieces; keep the other pieces covered with a towel while you work with one at a time. Lightly flour your work surface and your rolling pin and roll the piece of dough into a large rectangle, which should be at least 12" square when trimmed. Keep your rolling pin and the outside of your dough evenly floured. Flip the dough frequently to keep it from sticking, but too much flour will make it difficult to roll. Keep rolling until the dough is as thin as you can get it without tearing (about 1/16-inch thick). Trim the dough to even the edges and use a pizza cutter or a sharp knife to cut the piece into squares approximately 1 1/2" wide.

Transfer the squares to a prepared baking sheet; you can crowd them together, as they don’t expand while baking. Sprinkle the squares lightly with salt. Repeat with the remaining pieces of dough. Save the scraps under plastic wrap and re-roll them all at once just one time.

Bake the crackers, one sheet at a time, until crisp and browned. Check crackers after 5 minutes. If some of the thinner crackers brown too quickly, remove them. Then usse a spatula to stir remaining crackers around and return them to the oven to finish baking for another 3 to 5 minutes. These crackers bake quickly, so watch them closely - even 30 seconds can turn them from perfectly golden to way too dark! Remove the crackers from the oven and cool on the pan, a wire rack, or a plate; they cool quickly. These crackers will stay crisp for several days, but are best stored in airtight containers.